Green Lantern: In not so brightest day... 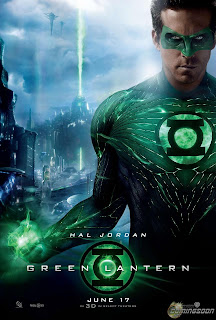 I have written about the joys of discovering films at festivals, with an open mind and without having read and seen too much about them, making your own opinion.. There is something to be said however about watching a film some time after its release, especially one that has already been shot down in flames by critics, with some very low expectations, as you might end up enjoying it. This is how I feel about Green Lantern.

A lesser known member of the DC Comics family, Green Lantern tells the story of an immature fighter pilot "found" by an alien green ring, which imbues him with great powers, as well as the responsibility of safeguarding its corner of the universe, as part of the Green Lantern Corp, which watches over the universe.

And I certainly did feel a perversely enjoyable pleasure watching it. Yes there are several aspects that just do not work. The Earth-bound scenes of the first half feel far too serious and grounded in realism, creating a serious imbalance with the more out-there, sci-fi scenes back in the green lantern corps home planet. We are asked to believe that the world will happily accept that some bloke with a green suit, coming out of nowhere can create some green race tracks out of thin air (don't ask), solely with the power of its will. Fortunately, as the story unfolds, the films seems more ready to embrace the silliness of Parallax proportions that engulfs the film.

Ryan Reynolds disappoints as a leading man. It is very unfortunate, but he was a lot more charismatic in supporting parts in the past, lighting up such otherwise forgettable duds as Wolverine and Blade 3. Here he seems oddly stiff and ill at ease. He even commits the unforgivable crime of uttering the ionic Green Lantern oath with as much conviction and passion as if he was reading a shopping list. He is not helped with a frankly bizarre, pulsating green CGI suit, and a mask that makes him look like he got caught in the way of a violent snot explosion.

Ironically, the director takes a perverse pleasure in tormenting the supporting cast of much better actors. Tim Robbins, Angela Bassett (looking distressingly younger than she did twenty years ago) and Peter Sarsgaard suffer the ignominies of reduced screen time and for some, an inglorious demise (not spoiling, not telling you which one or how). 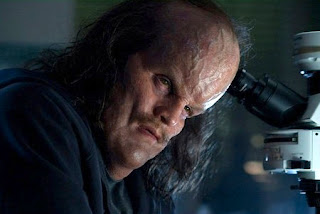 Peter Sarsgaard actually delivers the stand out performance, offering a mumblecore twist to that mad scientist modern update: the evil nerd. It is the only character with any kind of depth, despite the criminally short screen time, half of it spent in some kind of evil teletubby fat suit. Blake Lively of Gossip Fame, adds some bite to her character, but has the misfortune of having to play a fighter pilot, which is as believable as Denise Richards as a nuclear physicist in hot pants, in Tomorrow Never Dies.

And then the film suffers from the curse of all super hero origin story: there is just far too much ground to cover. With the unravelling of the superhero's mythology, there is little time left to develop any other plot strand. As a result, the final edit certainly feels heavily truncated to fit it all in, with some plot holes of cosmic proportions, and with a climatic scene of devastation in New York that is far too short (and not just that little similar to the ending of Rise of the Silver Surfer, thanks to its similar ubervillain, a CGI evil cloud).

Yet like I said, it is, in a perverse kind of way, oddly enjoyable. It certainly is never dull. The $200m budget is definitely on the screen. The action scenes are competently put together. And while too many super-hero films have held back with the fantasy in the past, for fear of alienating a more mainstream audience, the film is not afraid to revel in it. Green energy of hope, yellow energy of fear, incredible alien world vistas... I heard more than once a few members of the audience sigh in disbelief, but me, I was in nerd heaven.

Green Lantern is having a less than stellar run at the box office, and will most obviously join the ranks of those films who tease you with a post credit scene announcing a sequel that never will be (because the film flops), such as Flash Gordon and Buckaroo Banzai. I would not be surprised however if it is fondly and affectionately remembered in twenty years time, like the two aforementioned minor cult classics.