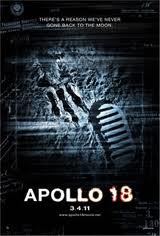 The Weinstein studio seems to be tossing around the release date of their Paranormal Blair Witch Activity in Space project around like an aspiring astronaut in suspended gravity. The film was originally supposed to be released in Spring 2011, a rather revealing teaser trailer was even released. And then the release date was shifted to January 2012 with no explanation. It has now been moved again, to early September 2011 for the US, although the UK has kept the January release. And a new trailer has now been released.


The move to early September might not be such a smart one, as the end of the summer is already crowded with horror releases, at the tune of one per week. And it is hard to understand what prompted the studio to push the movie as far back as next year originally. For such a small budget, surely it was not a case of the effects not being finished on time? Unless the final edit was such a disaster that they needed a full year to somehow salvage it (although there were no reshoots, that we know of anyway). 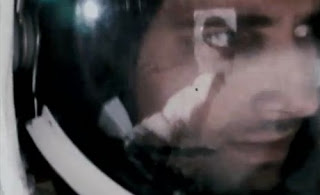 Even more surprising is the fact the this new trailer is actually shorter and less revealing than the first teaser. The film tells the story of the allegedly secret Apollo 18 mission that ended in disaster and was kept secret from the public, and is allegedly based on the lost footage found. (Found by whom? A galactic backpacker? Nobody ever went back to the moon after Apollo 17, or the fictional Apollo 18 one).

Strange phenomenons happen around the mission, with equipment breaking down, shadows and noises manifesting around them... And it looks like it goes from bad to worst! It is a clever idea I have to admit. While I have never understood why haunted occupants in films do not just run off, in space there truly is nowhere to go!

It is not entirely original however. There was an X-Files episode back in the mid 90's, that had an astronaut being followed back to the earth by a space ghost of some sort after a mission, and that was truly chilling and terrifying, as some of the best episodes of the serie could be, especially since much of the explanation was left to the imagination of the viewer. And there seems to be a space virus infecting one of the astronauts, just like Ghosts of Mars and Species. 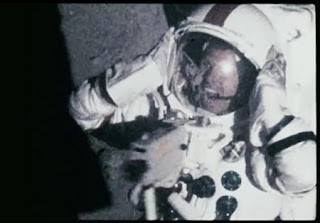 The first trailer, as seen in my previous post, seemed more intense. And if you freeze framed it, you could clearly see a space spider crawling around one of the astronaut's face in his suit, as per the picture above. Perhaps it was decided that the first trailer was showing too much too soon and ruining it.

With a $5m budget, the studio is probably hoping for a Insidious type of success, an example of microbudget that earned big. I do have a fantastic tagline if they need one however: "In space, nobody can hear you scream!". What's that? Oh, right!