Who hijacked the Dinner For Schmucks?

Blockbusters sometimes feature a few scenes that jar so much with the rest of the film, it makes you wonder if somebody highjacked the script while nobody noticed. This is how I felt while catching up with Dinner for Schmucks on dvd the other night, a film so bad, even if I had watched it on a plane I would have walked out.

But I carried on watching, as we finally get to the dinner, things take a really bizarre turn indeed, with some of the weirdest scenes I have seen in any Hollywood comedy. I would not call them funny, in the surreal way of Airplane and Naked gun, because they are not. They are just, frankly bizarre! I almost recommend watching the film for this last part alone, just skip  all that comes before. 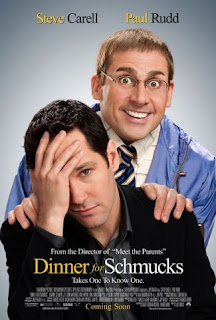 The film is a remake of French comedy, Le diner de cons, itself based on a play of the same name. The original film was about a group of well off friends playing a rather cruel game: each of them had to find the biggest loser/oddball they could find and invite them around for dinner, to make fun of them. Except that the film was practically false advertising in the sense that we never got to that famous dinner. Despite being a huge hit I found it distinctly average, slow going with only a few intermittent decent gags.
The American remakes keeps the original premise but expands it. For 100 minutes of its needlessly overlong 2 hours running time, it is also one of the worst films I have ever seen, woefully unfunny, dull, lacking any sense of pace and likeable characters. It features Paul Rudd and Steve Carell, both in a rare misfire, struggling as they are with badly written characters.

And as we finally get to the dinner, and as the regulars unveil their new guests, we are treated to the following: a medium who communicate with dead animals, including the lobsters served on the guest's plate, with much grimacing and eye rolling. The man who had the literally heart stopping dream in Mulholland Drive turns up with a buzzard he feeds mouth to mouth. Chris O'Dowd, from the I.T. crowd is a blind swordsman with an unidentified, and presumably hilarious accent. One of the guests brings Joan Rivers with his hand far up her backside (on close inspection he is a ventriloquist and she is actually a dummy, looking moderately less plastic than Joan). Zach Galifianakis, as some sort of Jedi IRS master of the mind with a zebra cape, has a mind fight with Steve Carrel. The mansion the dinner is in catches fire. David Walliams from Little Britain as a Swiss aristocrat, complete with dyed blonde hair and blue lenses, has his finger chopped off with a sword.

This is just as random as it sounds, and I sat there watching, baffled, wondering as I always do in that sort of situation how a full crew could have sat in front of this. I found a clip featuring the lobster woman but go ahead, treat yourself, rent it and watch the whole dinner scene.