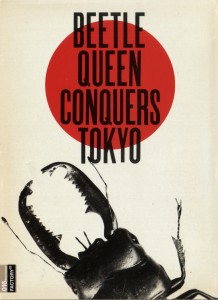 Can you think of a better title? There is indeed a film called Beetle Queen Conquers Tokyo, probably one of the best titles ever. But then unlike what it suggests, it is not a post-Godzilla creature movie about a queen beetle who gets too close and personal with some radioactive slime, grows to the size of a building and marches over the Japanese capital. Nor does it concerns a Harajuku girl icon whose bug inspired dress sense makes her a fashion icon.

Instead, the film is a documentary, which mainly deals with Japan's obsession with insects (who are often kept as pets in households). More broadly speaking, it is also an exploration of the Japanese concept of "Mono no aware", which can be translated as a sensitivity of the ephemera, and an appreciation of the transience of things, especially in nature. Which explains for example their enthusiasm for the short lived cherry blossoms. And indeed, this oxymoron of the Japanese culture that can be so contemplative and serene for that respect, and so raucous with its megalopolis, is what I have always found so fascinating with it. 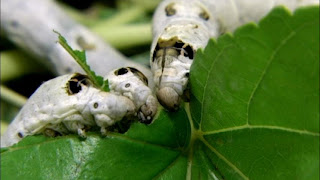 The film is two years old and was shown at the Austin's South by Southwest film festival back in 2009. It is finally coming out in the UK on the 1st of July, and I managed to miss a preview, which was held at a location as quirky as the film subject, the London Eye Hospital. The trailer looks like it is fairly low budget and not all that assured technically and yet I find it absolutely fantastic, largely thanks to its welcome experimental visual streak. And while some reviewers have complained that the film features a few lingering scenes too many of the busy streets of Tokyo at night (which reminds me of an experimental short film I made during my second visit in the Japanese capital years ago), personally I could watch hours and hours of footage of Tokyo at night and not get bored.

But I will not miss it when it finally comes out here and will review it so watch this space.