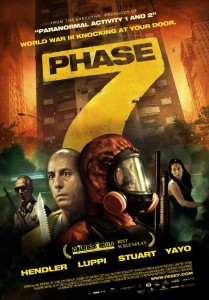 If there is one genre I love, in a guilty pleasure kind of way, it is the doomsday, end of the world type of film, especially if it keeps a fairly realistic tone. It does not matter what causes the end of civilisation, zombies, virus, killer bees, Big Brother return on Channel 5 this summer, I cannot get enough of it. I think the appeal is that this scenario usually involves ordinary people put in an extraordinary situation, which makes you relate to them and wonder how you would react if put in such a situation yourself.

So the first film I saw at the Edinburgh Film Festival had to be this Argentinian low budget apocalypse by way of a deadly virus, Phase 7. I saw it at a very lovely old arthouse cinema called The Cameo, well worth a visit by the way. The premise is not particularly original (the inhabitants of a appartment block get quarantined as an unknown virus epidemic is spreading around the world, and start turning on each other) but you do not want to tamper with a tried and tested formula too much.

And unfortunately, I have to admit this was a disappointment. The director seems to want to avoid the usual over the top hysterics of such films, and keep it grounded in reality, which is a welcome move. But by doing so, he took the misguided decision of having some very laid back lead characters, far too laid back even. The film begins with a couple stock-piling some reserves at a supermarket and bickering over trivial things like any couple, while the epidemic has started already. Once back home, as the army is sealing off their building, they seem to find the whole thing little more than a minor annoyance.

While I am all for shunning the ridiculous panic reactions from such films as Outbreak (1995), surely you just cannot be THAT laid back if the world as you know it is coming to an end, AND your wife is pregnant? And who is going to deliver the baby by the way? Horribly mutated agents of a new world order? (I digress, this is not in the film)

But the biggest problem I had with it is the mixture of genre, which does not work at all. Some humour gets injected throughout the film, which add little more than a few nervous laughters, (apart from one, hilarious visual joke) while stripping it of most of its tension. Shaun of the dead did it as Edgar Wright found the delicate balance to make it work, in here, by not knowing whether to make it funny or scary, it ends up being neither.

It is even more of a shame as the Argentinian director shows some real flair in some too rare scenes when the plot takes a darker turn, such as with an unexpected twist when a mild mannered neighbour shows his true nature, or with some shocking outbursts of violence which take the audience by complete surprise. And the electronic, minimalist score has some welcome echoes of the earlier, claustrophobic work of John Carpenter. But it is too little, too late.

I suppose we will just have to wait for Steven Soderbergh's take on the virus apocalypse scenario for a decent outbreak apocalypse film, with his Contagion which is out in October this year, with Kate Winslet and Marion Cotillard.