The Human (or Eewman?) Centipede 2: squashed! 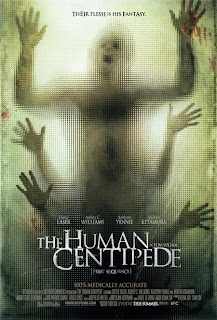 There are films that I simply refuse to watch, and The human centipede is one of them. So my first impression when I heard than an even more extreme sequel was in the works, was simply to forget all about it and look away. Yet it looks like the British Board of Film Classification has spared me the trouble with its decision to simply refuse to give it a certificate, meaning no exploitation in theatres and dvd will be possible, effectively banning it, an exceedingly rare occurence these days.

I will never forget the day I watched the infamous Salo by Pasolini, in an arthouse cinema in the Quartier latin in Paris, as an impressionable student in the mid 90's. Featuring anything from coprophilia, mental and physical, humiliation and torture, it was an attempt by the Italian director to make a filmic object that simply could not be consumed, in reaction to the cinema of mass entertainment. And I left the cinema staggering in the busy streets and feeling rather ill. 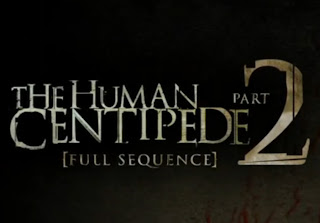 If you have not heard of the first Human centipede despite its ever growing reputation, it concerns a sadistic doctor who captures a Japanese businessman and two American backpackers, and his sick experiments with them. Try to picture what a human centipede might look like, with three people linked together, and pass the sickbag. Yet despite the graphic nature of the film, the BBFC passed it uncut with an 18 certificate last year, and it has earned its infamous reputation as a cult film of sort, even getting a reference in South park.

No such luck with the sequel, which had been promised as even more extreme by seriously disturbed Dutch director Tom Six. While the first one focused on the survival plea of the victims, this indirect sequel features a depraved character who, stumbling upon a dvd of the first film, becomes obsessed with its imagery and sets himself the task to recreate it. The shift of point of view from the victims towards the perpetuator, coupled with even more extreme violence is probably what tipped the British censorship over the edge.

I wonder if this will ever get shown in other countries. And to think that the director is working on the threequel... (please do not let it be in 3D!)
at 23:17