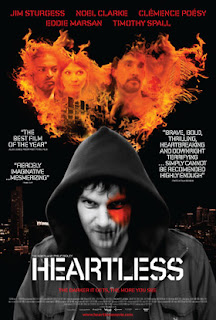 Before furry aliens unleashed their day-glo fangs in Sarf London in Attack the Block, a film had already tackled the subject of a council estate under attack from unnatural creatures: Heartless (2010) by Philip Ridley, which is out on dvd. Interestingly both films feature actor Luke Treadaway, in very different parts. The film went completely unnoticed last year, due to a marketing campaign and a poster presenting it as a straight foward horror film, which it certainly was not.

Hideous creatures are roaming freely in the streets of Shoreditch in East London, and I do not mean male hipsters wearing leggings. A sensitive man, afflicted by a heart-shaped birth mark on his face, realises that the hoodies making the news for their brutal murders are not wearing masks at all, but are, in fact, real demons. When his own mum gets killed by them in front of his very eyes, he decides to seek justice. An encounter with the devil himself produces an unexpected development. 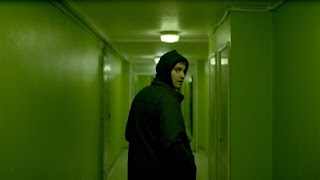 Philip Ridley has only made three films in twenty years, and is a very frustrating director. His style actually reminds me of that other British Director John Maybury, who thrilled with his first film Love is the Devil, only to also disappoint with his following work. While the former has an undeniable visual flair, thanks to his background as a painter, I found his two previous films' script leaving a lot to be desired, muddled and unsatisfying as they were. And unfortunately, this new film is no exception.
It all starts off well, with a very evocative and atmospheric portrayal of East London at night, and an intriguing premise. But it all goes downhill after that. I do not understand how a man of such visual talent as Philip Ridley resorted to a clumsy portrayal of its demons as reptilian creatures made with dodgy CGI. And the encounter with the Devil steers the story towards a more Faustian path which just does not work. 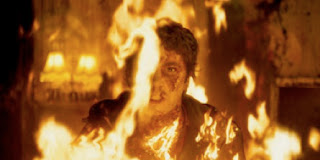 I am a big fan of mysterious films and enigmatic storylines but there is no mystery in here, just a confused script that does not seem to know where it is going, all to the way to its disappointing conclusion, leaving the audience firmly uninvolved. There is a message in here, and plenty of symbols, yet nothing to be gained from them.
Jim Sturgess in the lead (last seen sporting a laughable Russian accent in The Long Way) is impressive, and manages to shine through the muddled script, with a nuanced and emotional performance. Unfortunately none of the supporting actors are given much to do, especially Noel Clarke in a rather embarrassing part. And the romance with Clemence Poesy is not given any room to breathe.
I just wish Philip Ridley directs a script that he has not written next time, and makes full use of his visual talent. Interestingly, on top of being a painter, he is also a writer, with several books published. Yet it does not seem like his talent for writing books has translated to good scripts. If you are unfamiliar with his work, skip The Passion of Darkly Noon, and watch his flawed yet best and first film, The Reflecting Skin (1990), that showed a promise he has yet to fulfil.