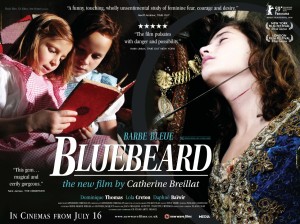 Having managed to miss Bluebeard at the London Film Festival in 2009, then during its UK release in the summer of 2010, I have finally caught up with it, as it has just been released on DVD. The adaptation of a fairy tale seemed like a marked departure for Catherine Breillat at first, a path that the French director has since followed up with yet another, less faithful fairytale adaptation, Sleeping Beauty. This prompted a British journalist to recently ask her if she had turned into the new Walt Disney, causing much hilarity.


Catherine Breillat is (in)famous for her very graphic films, and her exploration of female sexuality and gender politics, which has caused much controversy and some strong reactions (just take a look at the sort of comments she attracts from the largely male population of the IMDB boards). I do feel that she deserves more than her reputation for making intellectual porn however. She is responsible for the script of one of the most underrated yet best film by Maurice Pialat, Police (1985), with Gerard Depardieu and Sophie Marceau. And one of her recent films, The Last Mistress (2007), was also shunning graphic scenes, and offering a wonderfully intimate period drama. 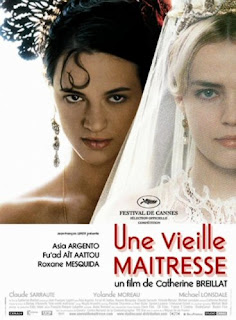 She has had to deal with some personal setbacks recently. She suffered a stroke in 2004, and got swindled by a young and smooth talking lover out of a small fortune while recovering, an incident that lead her to write a book called Bad Love, which she is hoping to adapt as a film. All of this might explain why she has mellowed down slightly.

The exploration of the more grown up undertones of fairy tales has already been done before, in the modern classic The Company of Wolves (1984) by Neil Jordan. With Bluebeard however, Catherine Breillat has gone for a much more grounded and realistic approach, which is reminiscent of the late Eric Rohmer foray into the genre, with Perceval (1978), and more recently The Romance of Astrea and Celadon (2007) : spare sets, no directing artifices, a minimalist style of acting... 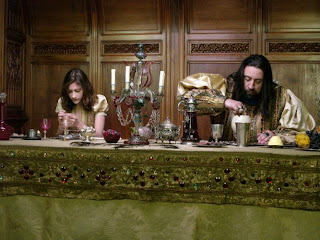 Bluebeard is originally a French fairy tale, written by Charles Perrault, about a violent lord, with a habit of marrying young women and a terrible secret, hidden in the deep of his castle.

The choice of this fairy tale however is actually consistent with the director usual style and themes. In fact, despite having made a very straight forward adaptation, it is unmistakably her own film, bracing a lot of issues she had dealt with before, the sibling rivalry, the feminist undertone, and the gender power struggle.

Rather than making Blue beard the ogre of the original source, here he is a much more gentle man, almost to be pitied because of his unattractive appearance, and who takes on his young new wife with an almost paternal and protective instinct. Indeed the best scenes are those depicting the tender interactions of this mountain of a man, smitten with his new wife, and this young girl who earns his respect and love, and is able to see through his appearance.

Less successful is the inclusion of some scenes with two young girls in modern times, reading the fairy tale and filling the gaps in the story, which felt unnecessary and added an unwelcome and tasteless conclusion.

While there is much to be enjoyed in this film, it might prove a little too slight and uninvolving for some, because of the minimalist approach. Fans of French cinema and of Catherine Breillat however should not  miss it, as it is opening a whole new chapter in her ever interesting career. Disney has been looking for quite some time for a director for their new Sleeping Beauty adaptation, Maleficent, they should look no further than the director of Anatomy of Hell! Blue Beard was released by New Wave Films in the UK and is now available on DVD.