Under The Silver Lake by - review

“There’s nothing to solve you know. It’s silly wasting your energy on something that doesn’t matter.” a girl casually says to Andrew Garfield’s Sam after he suggests there’s a hidden message in a song that will help him find a missing woman. He doesn’t listen to her lol. David Robert Mitchell’s Under the Silver Lake is an odyssey of pop culture that dives headfirst into Hollywood’s secrets, but it’s not really about that.


The film opens begins with The Association’s “Never My Love” playing as the camera pans over twenty somethings in LA before closing in on Sam, an unemployed loner stoner who’s part romantic, part sleazebag. The music plays like the film’s melancholic anthem, reflecting and sadly mocking Sam. His secluded world shifts when he meets Sarah (Riley Keough), a new resident at his apartment building. They flirt, listen to music, watch a movie, and hold hands. The next morning Sam awakes to find that Sarah has vanished without a trace. Where she’s gone and what that means to Sam is the driving force and punchline of Mitchell’s sun-kissed detective farce.

With an elliptical narrative created specifically for the conspiracy theory/redditor crowd, Silver Lake is an absurd puzzle that’s full of outlandish characters spread throughout the hills of Hollywood. Mitchell builds up Los Angeles folklore with characters like “The Homeless King,” a “Dog Killer,” and a woman called “The Owl’s Kiss” who murders at night. But in daylight this LA is almost entirely populated by the Instagram influencer crowd -- each dressed as if they’ve just gotten back from Coachella and are ready for their close-up. Then there’s Sam, who just seems to exist peripherally. 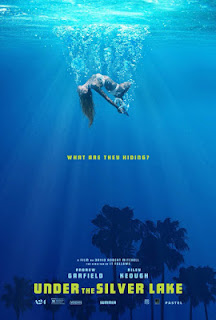 This is a film about men so obsessively warped inside of superficialities, both in the media they consume and the male gaze, that they cannot embrace reality. Instead of paying rent, or showering, or finding a meaningful relationship, Sam retreats into a web of self-delusion, with each bizarre encounter giving no answers, but instead another strange door to walk into. The girl he’s fallen in love with he’s spent only a few hours with, but has built her up into a myth. In a dream of his, Sam envisions Sarah in a visual homage to Marilyn Monroe, the most mythologized actress of all time. Sarah represents someone who can help Sam escape his sheltered reality, much like you’d see in a generic Hollywood movie (this feels vaguely like a critique of the manic pixie dream girl trope).

Sam envisions himself a knight in shining armor on a quest to save a girl, but he ends up just perpetuating misogyny. He voyeuristically stalks and spies on women, and his interest in them is purely sexual. The amount of POV butt shots in this is staggering (some have argued the film is more replication than critique). Sub-textually and inter-textually Mitchell offers ideas to chew on in terms of Hollywood’s mistreatment of women. The image of Sam staring at Alfred Hitchcock’s grave might seem like an obvious nod to Hitchcock’s noir films, but in another context it plays like a reminder of his misogyny -- the sort that has pervaded Hollywood forever, but now is just better hidden. Without getting into specific spoilers, Sam’s journey climaxes in a metaphor that underlines where such a limited view of women will lead men.

While its sub-textual offerings are more interesting than Mitchell’s delivery of them (his David Lynch homages feel off), Under the Silver Lake is still a carousel of entertaining encounters coated with an eclectic soundtrack. Mapping out Los Angeles like it’s a video-game map full of side missions, Sam bounces from mountains to mansions to secret parties to underground tunnels. Mitchell imbues just enough pathos in Sam’s yearning that you feel like there is some greater insight beyond this bullshit maze. It’s as if he’s taken pop culture’s post-modern obsession with brands and reddit level analysis and turned it into narrative form. Mitchell’s point seems to be that superficial obsessions are inherently void of meaning; that is to say, meaning that translates into real life. Sam’s obsession with Kurt Cobain, video games, and classic film can do nothing to help him be with Sarah, or solve his issues. There’s even a question of how much that he’s experiencing is real, or just his stoner mind. The film’s final shot seems explicit in its suggestion that Sam — and a whole generation of dudes just like him — has wasted his time, but maybe he at least finally recognises it.

Noir anti-heroes go on a journey to solve a crime or disappearance, equated with some existential search for meaning, and they often end up where they started. The private investigators of 40s cinema solved crimes that reflected the darkness of WW2; they re-emerged in 70s cinema with political corruption and the old guard of privileged white men as an untouchable enemy. So, what happens when a sleazy millennial goes on this journey? What’s the unseen force stopping them? Rather comically, Under the Silver Lake suggests it’s themselves, and they don’t learn much. David Robert Mitchell’s dreamy Los Angeles carnival is a laid-back satire of millennial men, a gonzo rabbit hole reflecting back at a culture that can no longer reflect on itself because it’s so far up its own ass.