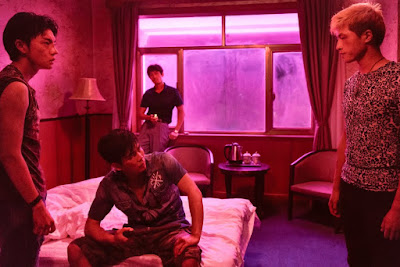 Chinese director Yi'nan Diao came to the attention of cinephiles with Black Coal, Thin Ice (2014), a neo-noir that went on to win the Golden Bear in Berlin, a rare win for a genre film especially at the German film festival.

The Wild Goose Lake beings with a mysterious rendezvous outside in an isolated train station at night under a torrential rain. From there, a long flashback involving a complex web of double crossings and intrigues as a gangster is released from prison drives the story before jumping back in time.


The Wild Goose Lake immediately impresses with its visuals, a feast for the eyes that is one stunning composition after another, neon-lit and rain soaked for most of the running time. This is the kind of film that needs to be seen on the biggest screen you can find for maximum impact. So many memorable scenes remain with the audience after the film ends, including a shootout around the lake at night with gun shots lighting up wild animals at close-up, and a group dance scene (with Boney M then Ghenghis Kahn playing) whose participant wear some lit trainers, that turns into an all-out brawl.

While the Chinese's director previous film was more of a mystery, here he focuses on gangsters, small time ones yet the film takes a somehow unexpected path in its second half, with some characters taking prominence over who you logically expect to lead the story. With short hair and a slim silhouette, Liu Aiai is not the typical female character from that subgenre yet it is interesting how Yi"nan Diao choses to maker her take centre stage, considering the typically macho universe she gravitates in. Yet it never feels like a laboured narrative affectation, she is an interesting character precisely because choosing to make a woman the lead of this story is not the point.

This kind of films typically involve a plot that is hard to follow and while the story goes back and forth in time with two separate flashbacks involving the leads, here the story is pleasantly easy to follow, that isn't to say that it is not complex and twisted still!

Yi'nan Diao finds a great balance between genre kicks and realism. There is violence but it never goes over the top, only once allowing himself an outlandish death scene so as not to derail the seriousness of the tone. There is also an underlying commentary on contemporary China, the corruption, the poverty and the fight for survival etc... that is dizzyingly dark, all the more because it feels so real.

Stories of sleazy gangsters, shady beauties and double crossing are nothing original yet the Chinese director manages to make all these tropes both referential yet fresh and new in a stunning and spectacular neo noir.