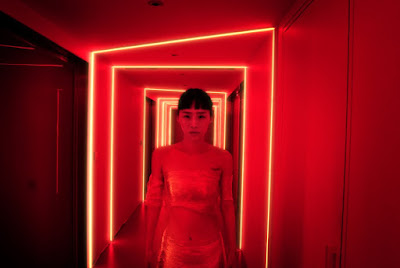 With the striking imagery of the first stills just released ahead of the festival and the very topical #MeToo premise, Nina Wu was one one the most promising offerings of the Un Certain Regard selection. With the lead actress Wu Ke-Xi having co-written the script, about the trials of a young actress trying to make it in a business ripe with abuse and exploitation, this also promised to be a heart felt, personal work.

In Nina Wu, Nina, a struggling and lonely actress who survives with a career as an internet personality of sorts, finally gets a chance to shine when wins the lead part in an espionage film. Yet the demands placed upon her by this role that she fully invests herself into take her into a dark path.


Nina Wu is full of good intentions, aiming to deliver a psychological drama filled with current social relevance (and one that its lead and co-writer Wu Ke-Xi must have a fair share of real life experience weaved into) while spicing it up with some very Brian de Palma artifices and a "what is real?" dollop of Black Swan tribute. Yet the Taiwanese director never quite seem to find the tonal balance between being too serious and too silly and while the issue it is depicting is admirable, it never quite hits the mark as a result. Nina Wu is psychologically abused on set and pressurised into degrading acts yet one cannot help being troubled by how exploitative it all comes across on screen. Of course it is kind of the point but a more skilled director would have managed to put a certain distance with what he is picturing on screen.

Mixing dream and real life elements to disorientating effect is a well worn trope that so many psychological dramas have done before and better, one that has become a stereotype and it is not handled in a particularly original way. It also has the unfortunate effect on making the audience doubt whether all that the actress is going through is real or imaginary, a very clumsy narrative direction considering what we now know about actresses that had to remain silent or risk not being believed and then ostracised when going public about that kind of allegation.

As such, it makes it challenging for the audience to enjoy the more genre-tactic elements of the story. Some of the more outlandish scenes coupled with a somehow amateur-ish acting could have turned this into the equivalent of Brian de Palma's Passion, but it lacks the sheer bombastic, go for broke playfulness of this cult classic, not to mention a more suitable budget.

At the very least Wu Ke-Xi gives it all in a committed performance that is almost worth watching the film for. Well intentioned but lacking in coherence and tonal balance, Nina Wu does not quite deliver upon its promises.