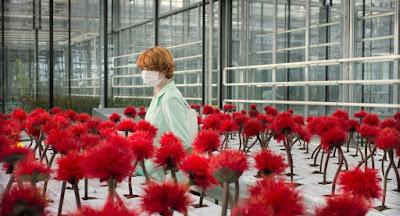 You never quite know where Austrian director Jessica Hausner is going to take us next. With an illustrious filmography under your belt, you would be hard pressed to find two similar sounding films, whether in the genres tackled, the stories... and yet it is the true mark of an auteur that her work feels coherent nonetheless. With Little Joe she tackles science-fiction (or does she...?), an intriguing prospect!

In Little Joe, biologist Alice (Emily Beecham) has developed an unusual species of crimson flower whose scent is said to induce happiness. Yet a string of unusual events and incidents makes her wonder if there is a more sinister side to her creation.


When some established directors tackle genre cinema for the first time, there is always the slight worry that they might consider themselves above it and not understand it and respect it enough. Yet nothing of the sort thankfully happens with Little Joe. The Austrian director tackles what we soon realise is a familiar trope of the genre but infuses it with her own, unique touch to wonderful effect.

From its very first shots, Little Joe is striking for the care given to its art direction, its particular use of colours and framing. It feels very slightly otherworldly and one also wonders when exactly the film is supposed to be set, with the contrast of the modern technology in the lab scenes against those at home who feel timeless. There is a cultivated contrast between the stylised labs, all in harsh white lightings and straight lines, and the unpredictable and living nature of the colourful plants

There is also an underlying level of threat from the beginning, a disorientating feeling that soon turns into a paranoia, like the one felt by the lead, yet one can never be sure if any of it is justified. From a chain of seemingly unconnected incidents to the way the characters very slightly alter their personality, Jessica Hausner maintains the ambiguity throughout, often making us wonder where the film is going and at times pulling the rug from under our feet narratively speaking. A brilliant scene has Alice's child seemingly confirm the nature of the events taking place only to end in a joke, a joke at our expense too as we thought we had it all figured out!

Little Joe also offers a discrete but biting commentary on that ongoing trend of wellness and the refusal by some to embrace life's negative emotions and complexities, in fact you half expect Gwyneth Paltrow to turn up in a cameo as herself and reveal that Goop is sponsoring this experiment. Kerry Fox has a supporting part which at first seems broad, as the cantankerous, single older woman but you soon realise her part was written as such on purpose, as if anyone who does not worship at the altar of forced, constant happiness can only be a miserable person who has to be ostracised.

While the premise and its themes feel very sci-fi, Little Joe often feels like a Hitchcock thriller, filled with paranoia, particularly with the way events unfold seeing those around her either close in on her (or are they?) and the nagging feeling that, while she might not be losing her grip on reality entirely, she may well be connecting events and imagining things.

Emily Beecham also plays Alice like a Hitchcock female lead, with a detached coldness and never attempting to win the audience's sympathy, which is so refreshing and makes her character a lot more complex and interesting.

Subtle, understated and mysterious while never feeling frustrating, Little Joe is an intriguing experiment, one of the films that seem to start in your mind once the end credits roll.