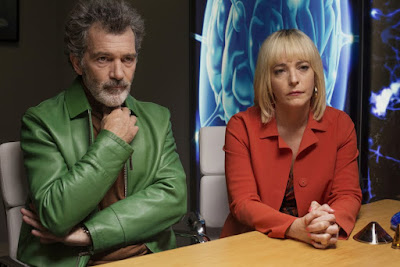 Always the bridesmaid... Despite numerous of his films screenings in competition in Cannes and an illustrious career, Spanish master Pedro Almodovar has yet to win the coveted top award. He came close in 1999 with arguably his masterpiece All About My Mother but the jury back then was more impressed with a kind of macho social realism and had to do with best director. While he was one of its fans, he must have felt somehow despondent to hand it to The Square in 2017, back when he was president of the jury, to a still young and less accomplished director, but such is the name of the game.

He is back this year with his most personal film to date, Pain & Glory. Most of his films have always had some personal elements to it (and indeed you could say that about most films/directors!) but this is the film that most mirrors the Spanish's director life and particularly his current life as he reflects back on his work so far but also his youth, his lovers, the relationship to his family...


It is interesting how much he has chosen to reveal himself in this, as, for someone who has made some outlandish and outrageous films, there has always been an element of reserve, modesty and privacy to his public persona. A montage shows us how many physical ailments the director has gone through over the years and is still suffering from, something he has never talked about in interviews. At the start of the film, Salvador is due to make an appearance at the screening of a remastered film of his, Sabor, and the way he talks about the conditions the film was made, the tumultuous relationship with one of the leads, Alberto mirrors almost word by word what happened when Pedro Almodovar made The Law of Desire (1986) and his issues with lead actor Eusebio Poncela.

In flashbacks spread throughout the film, we also learn about his childhood in a village where he and his family were literally living in a cave, and his particular bond with his mother Jacinta (Penelope Cruz). In these expensive scenes the Spanish actress is luminous and wonderful, full of dignity and love for her son, a fantastic performance that echoes some of the best work she has done in the past with Pedro Almodovar, especially Volver. We also understand what brought the young Pedro/Salvador to culture, knowledge, trying to escape his life for a better one, but also his sensual awakening in the form of an attractive labourer.

There is no self-indulgence in this reflection of his life and the harder scenes show his elderly mother in some further flashbacks and the somehow complex relationship she had with him. As proud as she was of him she still never quite understood why he couldn't just take a small job in a small city. She also blamed him for being a "bad son" and not spending enough time with her in the twilight of her life and you can feel the palpable guilt pervading throughout.

A later scenes sees him meet an old flame after decades apart and their reunion in Salvador's flat, full of tenderness, culminating in an embrace and a kiss, the sort of very touching scenes involving two middle aged men you rarely get to see.


Being the gentle man he has always been, for all his excesses, there is no harsh recriminations, no self-pity and finger pointing, just a certain melancholy laid bare.

As Pedro Almodovar alter-ego, Salvador, long time muse Antonio Banderas is quite simply, phenomenal! While they look nothing alike in real life, the Spanish actor perfectly mimics his director's mannerism and persona, in a performance that is full of subtlety and nuances.

Pain & Glory is Pedro Almodovar's most personal and affecting film in a long time.