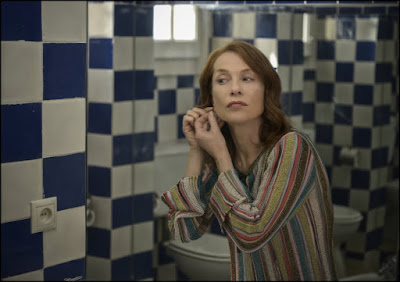 Frankie (Isabelle Huppert) is a famous French actress who, upon learning she only has a few months to live, decide to invite her entire family to Sintra in Portugal for a family holiday.

The ensemble cast  of Frankie is a cinephile dream and early on, a scene features Brendan Gleeson, Pascal Gregory, Carloto Cotta, Marisa Tamei and Greg Kinnear in the same shot as a kind of Avengers Assemble of international cinema which is enough to get the audience's heart pumping. Such a shame then that hardly any one of them is given anything to do or worse, feel totally superfluous to the narrative.


Brendan Gleeson, as Frankie's husband, just is. He stands around and listens to people a lot. Pascal Gregory seems to be playing a version of his real self in a rather annoying, knowing part. Carloto Cotta, who has played so many interesting parts recently, from Tabu (2012) to Diamantino (2018) plays a tour guide who lives far from his wife and that's the extent of his characterisation. Hiring such illustrious cast then wasting them feels ostentatious. Then spare a thought for those lesser known actors playing respectively the daughter, son in law and granddaughter of Frankie, some characters that bring literally nothing of interest to the story and could have easily been excised without losing anything.

As for La Huppert, if you are going to get her to play a famous actress then you would better rise to the challenge and write an interesting part or risk coming across as lazy yet she cannot fully save her character. The premise made us feel the worse and it comes across as even more contrived than feared. We are thankfully spared some shots of a dying Frankie as her family and friends gather around her, so much so however that she seems to be affected by a very Hollywood kind of cancer, with not a hair out of place.

This should not come as a surprise to those who have followed her career all these years but Marisa Tomei is the real knock-out however. Ironically, Ira Sachs has been more inspired by her character than the lead, writing her a multi-layered and complex character that the Oscar winning actress never feels the need to overplay. A scene in which Frankie's son explains to her Frankie's scheme to get them to meet and, hopefully, marry, is one of the best she has ever played, her reaction shot a myriad of conflicting emotions.

Jérémie Renier feels more like a plot device than a character however Greg Kinnear, in a few scenes, is the only other pleasant surprise, his scenes with Marisa Tomei a winning combination of humour and sadness. If only the rest of the characters and plot had been as interesting.

The film comes across as bourgeois and does not have much to say nor does it feel compelling in any way and one has to wonder if Ira Sachs's inspiration is inertly proportional to the talent of his cast and the quality of his films has been following a slippery slope since the raw and sincere Keep The Lights On, which was filled with unknown actors. Frankie is a disappointment with few redeeming features.