Cannes 2019 - The Lighthouse by Robert Eggers 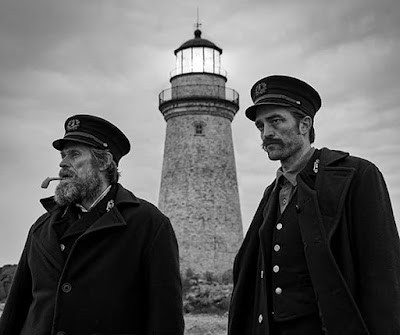 Robert Eggers made a big impact with his first film, period horror The Witch and the concern for a young director with an acclaimed debut is to retreat into similar territory for their sophomore effort, which seemed to be the case when his second film was announced as, you guessed it, a period horror, for which an evocative still was released. Except that he had a few tricks up his sleeve...

Set in the 1890's, The Lighthouse sees the young Ephraim (Robert Pattinson) takes his position as an assistant to caretaker Thomas (Willem Dafoe) in a lighthouse on an island off the coast of New England, a position that is only supposed to last four weeks.


Shot in the Academy ratio as a tribute to early silent cinema, and with a wonderfully evocative black & white that evokes German expressionism, the film is, as expected, beautifully atmospheric. Filmed in the unforgiving and dramatic coast of Nova Scotia, the director did not need to use any special effect as the rocky landscape is battered by some very scenic storms throughout, the kind of "might of nature against puny men" location Werner Herzog might have used in its youth.

That is not to say that the film is too "pretty" and the director does not gloss over some less appealing details others might have. Let's put it this way, if you're going to have two men live in close proximity with no other company, they'll soon do away with any niceties and preciousness. Pretty much as soon as Ephraim arrives in the room they are sharing, Thomas lets out a few farts, a bad habit he will keep throughout the film. Ephraim himself, being youthful and vigorous yet a little more timid, is rather fond of leaving the room for night time wanders and sessions of self-pleasuring. Other bodily fluids make an appearance throughout. This gives it a very lived-in, realistic vibe that period film usually prefer to eschew.

The two men do not see eye to eye, with the oldest bossing his newest companion around, with the pressure and insults mounting until the pair finds the only way to get on: drinking together, alcohol seemingly the answer to all their woes.

This is not quite enough though and soon the isolation gets to Ephraim, who sees and hear strange things (or is he?). A one-eyed, aggressive seagull won't leave him alone, a recurring dream (or is it a dream?) has him come across a mermaid and he even witnesses Thomas up there in the lighthouse at night up to some strange, seemingly otherworldly shenanigans.

While the tone is serious at first, it soon descends into black comedy territory, with the desolation and remoteness getting to them, shouting matches, booze and colourful insults flying around and the veneer of society quickly receding, not helped by the fact that the ship that was supposed to send Ephraim back to civilisation never shows up, allegedly because of a storm. As time goes by, and Ephraim and Thomas do not seem to agree on exactly how much time is passing, the former grips on reality and even his own identity seems to desert him, while it becomes obvious the latter had long lost it already.

This is where The Lighthouse moves up one gear after its brooding first half, with the men descending into histrionics, fights, paranoia and the director conjures up some impressive, nightmarish visual compositions with a fantastic, oppressive score that seems to be comprised of heavy machinery, loud noises and ship horn.

As intense and mad the film is, while one cannot not failed to be impressed by the commitment of all the talent involved, one has to wonder if under all the OTT razzle dazzle, the film actually amounts to much. Questions about madness and identities, not to mention the island setting and black & white, bring Persona to mind but a bro-ey Persona. With its dark humour and ambiguity about what is actually going on, The Lighthouse also feels indebted to The Tenant. Yet the director/scriptwriter does not actually have that much to say about fractured personalities and madness, he is just happy to let his two leads go at it. You could even argue that the premise of a character's descent into madness is not all that original in itself, being the a well worn trope in many psychological dramas and the film does not have anything really new to bring to this subgenre.

Willem Dafoe, as a gruff seaman, makes his Green Goblin performance feel demure in comparison, with his character a cross between Captain Haddock (with whom he shares a penchant for some choice insults) and Poseidon. Yet it is Robert Pattinson who impresses the most, gamely up for trying to outdo his acting co-star and letting it all out, showing us yet another facet of his vast talent we still had not seen. He confirms, as if there ever was any need to, that he is the most interesting, versatile and talented actor of his generation.

A bombastic psychological drama as much as a dark comedy, The Lighthouse might not have that much depth to it but it is a fun, wild ride and a visual feast.