Cannes 2019 - Portrait of a Lady on Fire by Céline Sciamma 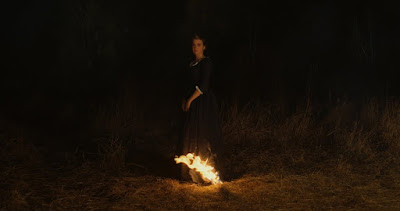 In The Portrait of a Lady on Fire, Marianne (Noémie Merlant) is commissioned by a countess (Valeria Golino) to paint the portrait of her daughter Héloïse (Adèle Haenel) without her knowing, as she is to be married to an Italian nobleman against her will.

We expected her to be in official selection with Girlhood, which ended up opening Directors' Fortnight in 2014 but French director Céline Sciamma has finally made it to the official selection, and in competition, with The Portrait of the Lady on Fire. Known for her very contemporary settings and queer sensibilities, she knows tackles a period drama, a risky proposition considering this is a genre that has proven difficult to master by many, stifled by pretty costumes and bigger budgets.


Yet right from the opening scenes, it is obvious that Céline Sciamma isn't shackled by the genre's limitations, quite the opposite actually. With the story told in flash backs after the prologue, the director's cinema feels light and alive. In a few early scenes depicting Marianne's arrival by boat, beautifully shot (by cinematographer Claire Mathon who also did wonders in Atlantique, also in competition), the film feels both alive and determined, showing us the painter's quite determination, in a style reminiscent of the cinema of Jane Campion, The Piano in particular. (and it cannot be a coincidence that the title is so close to that less universally liked film, Portrait of a Lady).

When Marianne meets Héloïse for the first time, the dialogue is spare but the communication isn't. Without any words being uttered, the latter is constantly following the former with her gaze, trying to assess her with the sorts of steely assurance the French actress does so well.

When romance develops, it is through some carefully orchestrated and subtle details: a glance staying on the other woman's face just that little bit longer than necessary, the comfortable silence... while fire is raging under the ice. While Céline Sciamma sticks to a nearly austere and very realistic style for most of the film, she allows herself a handful of surreal flourishes: a group of women's hypnotic chanting in the background while we finally witness the spark that literally sets one of the woman on fire as the other watches on silently, later Héloïse becomes the kind of haunting presence all in white that you would expect in a Manoel de Oliveira film...

As important as the romance is to the story, The Portrait of a Lady on Fire is just about the place of women in society and how to reclaim it, be it Marianne breaking gender conventions by tackling a very male activity, or Héloïse trying to take control of her fate at a time when such a thing was unthinkable... All of this happening under the watchful and firm grip of Héloïse's mother. As the countess, Valeria Golina gives some depth to a secondary character that could just have been a plot device. There is no fits of anger from her and barely a raised voice, just a quiet understanding of where a woman belongs in these times and what must be done with her daughter to ensure their survival.

As Marianne, Noémie Merlant is a wonder of softness and strength while Adèle Haenel gives the best performance of an already illustrious career, all in subtlety, glances and barely contained emotion. The last scene in which she expresses so much with so little artifice makes her as safe bet for the best actress award!