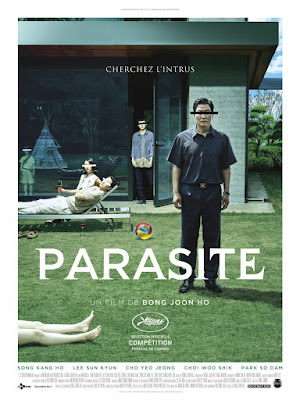 With such a strong line up and so many potential choices for the top prizes, we knew there were going to be some surprises ahead and we were not disappointed in that respect! It was obvious early on that the jury had struggled to decide, which Iñarritu commented on his opening speech and indeed, not only did they split the jury prize in two, they also added a special mention prize.

This special mention prize to It Must Be Heaven by Elia Suleiman felt a bit like a consolation prize and it did not look as if the director was all that thrilled about it! Then came the joint prize winner, to Les Misérables by Ladj Ly, which had made a big impact when it screened early on and more surprisingly to Bacurau by Kleber Mendonça Filho & Juliano Dornelles. The latter is a  thrilling Brazilian film that blends in genre elements that would not be out of place in an early film by John Carpenter (to which it is heavily indebted) as well as some very contemporary social concerns. That was to be the first surprise of many.


A persistent rumour had Céline Sciamma winning the Palme d'Or yet she had to do with best script for The Portrait of the Lady on Fire, a slightly baffling decision which also seemed to surprised her as she mentioned how much of a collaborative effort this film had been and a director award might have been a better fit, which it could have switched with The Young Ahmed's directing prize, another odd decision.

Best actor went to Antonio Banderas for Pain & Glory, highly deserved yet a somehow bittersweet victory as we then realised the film was not to win any top award (the festival rules prevent a film from winning either the Palme or the Grand Prix and another award). One has to wonder what Almodovar has to do to win the top prize in Cannes but I had predicted it. As much as I love his cinema, for whatever reason each of his film seems to lack the spark to would take it through the finishing line, outside of his established fans and film critics.

Similarly, the path was open for top favourite Adèle Haenel to win best actress since the rules allow an acting award and a best script award to be won by the same film. Yet it wasn't to be, the jury probably feeling the need to spread the awards in such a rich year. Emily Beecham is one name not a single person had predicted to win yet it feels like yet another bold choice. Her part in Little Joe is not the kind to win acting prizes usually, being a somehow understated character in a genre film but the British actress shines in it, as a sort of nerdy Hitchcock-esque heroine.

Then came to top two prizes and we were all pleasantly surprised by the audacity of the jury. As loved as the film was, few of us expected Atlantique by Mati Diop to come runner-up, with a singular film imbued with both social and magical realism. The director seems completely overwhelmed by her win and Sylverster Stallone handing her the award on stage was a surreal yet brilliant touch.

As for the Palme d'Or, the jury has to be applauded for its audacity yet again. Parasite screened on the same day as Once Upon A Time in Hollywood and completely stole its thunder. In all my years in Cannes I have rarely seen a film elicit such a strong reaction at a press screening, with the audience clapping, cheering, gasping...  Then everybody got talking about it the next few days and it was obvious it had set the Croisette on fire. Parasite is a genre hybrid that is full of surprises but with a social conscience too, feeling like the flip side of last year's winner Shoplifters. I had it down as Grand Prix winner in my predictions as I never expected the jury to give the Palme d'Or to such an insane and unusual film and I am glad to have been proven wrong. It is also the first time South Korea finally wins the top prize in Cannes, a truly deserved recognition for arguably the consistently best (and maddest!) cinema in the world over the last two decades. The South Korean press in Cannes celebrated this win as if the country had won the World Cup final, a thrilling sight!

I had also predicted Tarantino would go home empty-handed. As well received as his film has been, there was no comparison with the way Pulp Fiction exploded at the festival in 1994 at its first screening which I attended all these years ago. The jury must have felt that for a director of that caliber and history at the festival, it should be all or nothing which might explain why they did not insult him with a lesser prize.

The jury this year has had the audacity to reward some mostly new and exciting talents in a year when many established talents made their best films, they have given prizes to films with a finely tuned social conscience but that never forget to give us some audacious cinema too, the perfect culmination to arguably one of the most exciting competitions in decades and with the Cannes Film Festival yet again proving that it is heaps ahead any of its competitors as the best film festival in the world!