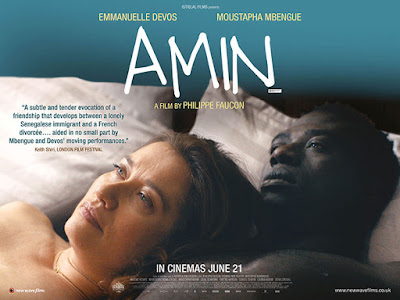 In recent years there’s been no shortage of films about immigration, but Philippe Faucon’s Amin brings a fresh perspective to a crisis that mass media too often broadens in scope and reduces to numbers. Telling the story of Amin (Moustapha Mbengue), a Senegalese immigrant, Faucon attempts to explore the interior life of an immigrant while stripping down the exterior. Working in Paris for a construction company, Amin lives in hostels with other immigrants and longs for his life at home, but while metaphorically building his new life, his past begins to crumble. When Amin strikes up a relationship with a French woman named Gabrielle (Emmanuelle Devos) his life begins to take a new shape and a conflict between his past and present melts together.


While this could’ve fallen into trite, cliché territory about a man and his infidelity, Faucon is aware of the effect on families, and gives focus to the women and children who are left behind by the men in their lives. Amin’s wife Aisha (Mareme N’Diaye) struggles to raise their children and tells him to bring them to France with him, but their literal and metaphorical distance is an unspoken specter in their relationship. Arguably she provides the most compelling conflict in the film and could have used even more screen time. Still, as a B plot it adds a somewhat nuanced and fairly unexplored note in recent European cinema that’s centered on immigration.

By refusing to conform to plot conventions, Faucon and his actors make all three of the lead characters feel “real” and like they have had genuine, lived-in pasts that have shaped who they are. Faucon’s Europe is one of transition, highlighted by all types of people and classes, set amidst the motion of a city in a literal and metaphorical re-construction. Amin is an empathetic film trying to tell a story about distance between yourself and your wants, the people around you, your community, and underlines this by the literal geographical distances of immigration.

The narrative is calm and loose, perhaps lacking in focus and strength, but there is something refreshing about seeing life just be complicated and without any clear reason. Faucon resists the temptation to use contrived conflict for story. He simply lets the characters live in the everyday, the silence of the city and of each other. No matter the circumstance, life is messy. Love enters life and leaves. The past beckons for us as we move forward. Home is elliptical. While the film’s muted approach to drama limits its reach and search for complexity -- arguably skirting into unsatisfying development -- Faucon successfully expresses an interior life in his lead character. The film’s title, also its lead character’s name, acts as a sort of question and examination. Who is Amin, and more importantly, where is he going? Both the audience and Amin himself are left to look at all the broken pieces before choosing how to construct his future identity.