In Fabric by Peter Strickland - Review 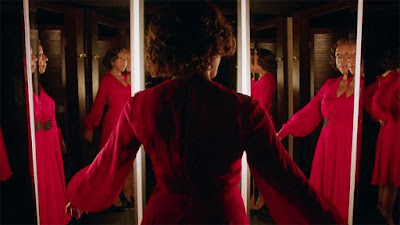 There are few words in the English language as exciting to hear together as “Peter Strickland’s new horror film”. After the thoroughly bizarre ride of Berberian Sound Studio, I was ready for Strickland to astonish and amaze once more with his latest offering: a British giallo horror about an indestructible, cursed red dress.

As with Berberian Sound Studio and his previous film The Duke of Burgundy, Strickland brings his audience into a highly stylised world, laden with sumptuous visuals and more than a few moments set to provoke gasps - and maybe the odd laugh. In Fabric takes place around a department store in the South of England, and tells the story of a dress described in the store’s catalogue as ‘artery red’. The dress is a perfect fit on whoever wears it, but the consequences of owning the lavish garment prove to be fateful.


The dress’ first unwitting victim is Sheila, played by the ever brilliant Marianne Jean-Baptiste, a divorcee from the town of Thames Valley on Thames, who chances upon the dress during a spot of retail therapy at Dentley & Soper; the local department store. It’s the time of the January sales and Sheila is quite literally beckoned in by the store’s TV commercial: a cavalcade of synth noises over the repeated images of the store’s floor staff gesturing their potential clientele to come thither.

Fatma Mohamed, a regular feature of Strickland’s past films, returns here as a saleswoman at the store, and she’s introduced in a way which immediately suggests something of the night about her. From her Victorian period style dress to her almost archaic way of speaking, Mohamed’s Miss Luckwood casts an indelible mark on the film, and her coven of fellow assistants quickly make it clear that a dress from Dentley and Soper might be a purchase that Sheila will quickly rue.

Strickland is a very meticulous filmmaker, and one whose films readily fetishise its subjects. In Fabric is no different, and while there is an overall feeling that Strickland was intending to present the film as a criticism of rampant capitalism, he seems far more interested in the dress itself. Strickland’s tactile style of filmmaking made me almost able to feel the dress through the screen; it’s easy to understand the allure felt by the film’s characters. That same feeling of physicality and touch is played to a very different effect in a thoroughly startling sequence involving a washing machine, and Strickland allows the intensity and tension to ramp up in this sequence; it feels very much like the film’s standout scene.

For all of the atmosphere and character work in the first half though - including a hilariously caustic turn by Gwendoline Christie - In Fabric undergoes a major shift in its narrative to a second story based around the dress and a new set of owners. After this, the film sadly struggles to pick up its feet again and I found the momentum built in the first story dissipating very quickly. The second story is certainly not a weak one, and there are some great moments of thoroughly dark comedy, but so much of the latter half of the film repeats moments and images from the former, that it almost begs the question: why include this?

If I had to guess, Peter Strickland was so enamoured with the story of a cursed, artery red dress, that he wanted to spend as much time telling its story as he could get. It’s no bad thing by any stretch, and the end result, while somewhat bloated - even at just under two hours - doesn’t feel like a lesser entry compared to the director’s previous work. Quite simply, Strickland is one of very few filmmakers who can make a truly evocative piece of cinema, and for the frustration I felt at that major narrative decision, I couldn’t help but remain utterly transfixed throughout the film’s running time. Much like the punters scrabbling outside the doors of Dentley and Soper’s sales event, I was only too happy to give myself over to the madness waiting within, and I can’t wait to see what this mad genius of a director has to offer next.