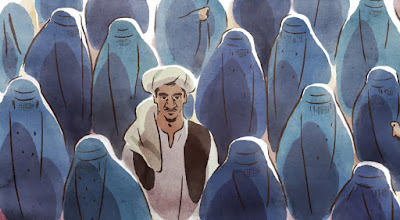 In Kabul in 1998, Atiq, a former moujahidin reconverted as a prison guard leads a disillusioned life, remaining faithful to his cancer ridden wife who is living her last few weeks. Meanwhile, the young Zunaira and Moshen are in love and trying to live their passion despite the heavy restraints put upon every aspect of their lives by the extremist religious regime in place.

The Swallows of Kabul is adapted and co-directed by French actress turned director Zabou Breitman and Eléa Gobbe Mevellec and this is the kind of cinema that can come across as critic-proof, in the sense that a heavy-going, topical social or political subject can make it difficult to criticise it so there was that concern before getting into this screening.


The hand-drawn animation is striking and while very beautiful to look out, never tries to soften the harshness of the subject, a contrast in evidence early as just as we are settling in the story, we are faced with a scene in which a woman, accused of moral depravity, is stoned to death, the graphic format making it even somehow harder to stomach. Interestingly one might assume the original material was a graphic novel but it actually is not so it was an artistic decision to turn it into an animated film. Perhaps the directors felt modern audiences have been desensitised to violence seen in the news in that part of the world hence the decision to go down the animated route.

This is a French speaking film and the French voices do distract from the atmosphere however as their phrasing make them sound more like they belong to a café in St Germain than the streets of Kabul, especially the young couple. One would obviously not expect them to put on an Arabic accent but a less pronounced one would have worked better. 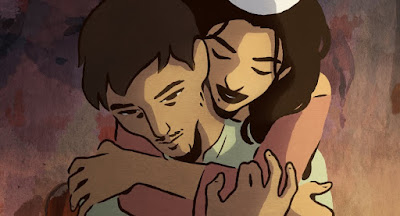 The story does not gloss over the horror of everyday life in the Kabul of 1998. Personal freedoms are non-existent, women are second class citizens (if that) with zero rights and hypocrisy is blatant, such as when a man higher up in the echelon of authority is seen eloping with barely clothed women while discussing the future death sentence of a woman. While there is a raw power of seeing the common people live get on with their daily lives the best they can despite so many restrictions and it is hard not to be moved and angered, the film also feels a little "show and tell" in those scenes.

The two stories collide in an unexpected way after a tragic event, one that forces Atiq to question his own choices. Brutal political power survives thanks to the passivity of the people but all it takes is a spark to ignite rebellion, reawaken the idealism of his younger years and he makes a decision which might seem hard to believe narratively but one that makes sense as the story goes along.

This is when The Swallows of Kabul really should have soared, with a plot development that should logically has given the film a mighty emotional pay off. Frustratingly, this is where the limits of the script and direction become more apparent. A devastating and surprising final act lacks the subtlety and finesse to fully deliver, especially in its dialogue, and is not helped with a clumsy visual metaphor involving the swallows of the title.