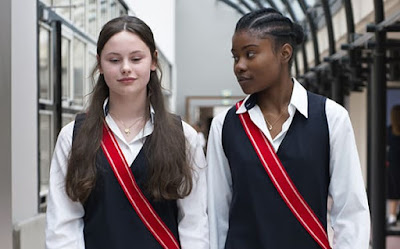 In Zombi Child, in present day Paris, Haitian emigrant Melissa (Wislanda Louimat) has been struggling to make some new friends in her prestigious French school when a group of schoolmates welcome her in their sorority. Meanwhile in Haiti, through flashbacks we follow the fate of a young man who becomes the victim of a voodoo spell and is turned into a zombie, forced to work for free in plantations as a mindless drone whose memories have deserted him.

Bertrand Bonello tacking the zombie genre (just like Jim Jarmusch did this year with festival opener The Dead Don't Die), that was an interesting proposition when we first heard about this, even though we knew this would not be be straightforward genre fare!


Unlike Jim Jarmusch, this is not Romero that Bonello has in mind, rather his film is infused with the spirit of Tourneur, whose influence is very much in evidence with the way the tension is so insidiously built up and the scares mostly unseen. A possession scene, that staple of horror films and one that is usually so ridiculous and laughable, here impresses by being genuinely scary, eschewing any cheap CGI and relying instead on masterful editing and some frightful voice sound effects.

The scenes following the zombi (in its correct, original spelling) are eerie and oddly beautiful, following a tortured soul condemn the wander Haiti while flashes of memories of his previous life slowly do come back to him 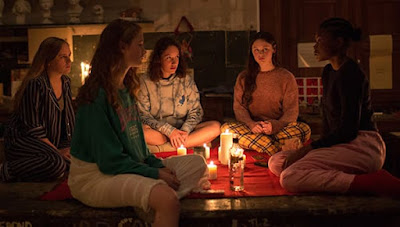 Teenagers are notoriously tricky to accurately portray on film and after Nocturama, Bertrand Bonello proves that he has a real knack to write some believable characters of that age group. Focusing on a group of teenage girls's sorority (a literary sorority, a hilariously French touch), these are some seemingly well adjusted and mature young women. There are no emotional outbursts, no excess  of any kind. While they lead what seem to be easy lives, that is not to say they are not affected by stress when faced with the very competitive examination system in the elite school they are in (unlike what you might find in the UK and USA, this elite school is based on the merit of their parents, not their fortune). Their representation feels very Sofia Coppola in that respect, with the feminine camaraderie (their banter coming across as so authentic) and the teenage ennui. They are also not immune to heart aches and perhaps not quite yet equipped to fully deal with them however, setting the narrative into motion towards an unexpected development.

Their interaction with newcomer Mélissa is subtly handled. This is no Mean Girls clique whose members become BFFs with her by the third act, rather their slight discomfort at her perceived oddness that never seems to fully dissipate is also mixed with a curiosity for her culture, culminating in a beautiful, extended scene in their school at night in which they are enthralled by the mysterious tales of her ancestry.

The film puts the spotlight on the colonial past of France, its guilt and its place in history but is careful not to be too naive about it, indeed the zombie victim is not being exploited by outsiders but by his own people. There is an underlying commentary on colonialism however and the temptation of the richest countries to meddle with others without fully understanding their culture, as one of the girls is about to commit the irreparable. The depiction of voodoo is sensitive and truthful and even though the film has some genre outbursts, it never feels like folklore tourism and cheap exoticism.

As strange a combination of genres as it might seems, Zombi Child is yet another captivating entry in the ever surprising filmography of Bertrand Bonello and a very original take on this well worn subgenre.