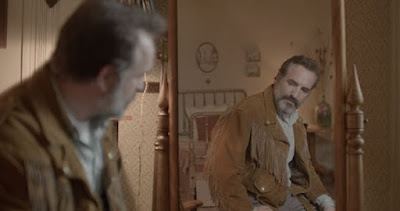 French director Quentin Dupieux is a real maverick across several artistic mediums. An electronic musician also known as Mr. Oizo, he has delivered a filmography filled with UFOs (unidentified filmic objects), with various degrees of success but with a go for broke attitude that is commendable. From Steak to Wrong Cops and Reality, not forgetting his best so far in my humble opinion, Rubber (about a killer tyre...), there simply is nothing quite like him and his work so any new films is his is always greeted with a certain, tensed trepidation.

His latest (and starriest) just opened Directors' Fortnight at the Cannes Film Festival, and considering the very strange premise, its presence was a fitting companion for this ceremony considering it also saw John Carpenter receive a "Carosse d'Or" for this career. In it, George (Jean Dujardin) has a fetish for deerskin clothes but wearing them is not enough, he also goes on a jackets stealing spree, often obtaining them from unsuspecting victims through some brazen set-ups.


Having blown all of his savings with the purchase of a vintage deerskin jacket, he seeks refuge in a hotel in a mountainside village, dragging bartender Denise (Adèle Haenel) in his increasingly erratic escapade.

With the A-list cast and relatively straight-forward narrative (for Quentin Dupieux anyway!), Deerskin feels more accessible than many of the director's previous films. Despite the oddness of the premise, the film delivers surreal yet audience friendly jokes after one another at rapid succession. Jean Dujardin's natural also helps win over the sympathy or at least interest of the viewer.

While most audiences are probably still wondering what Dupieux's films were all about, or indeed if they were about something, Deerskin's message seems a little more approachable. We learn that George is recently divorced and close to being destitute, with his bank cards having been cancelled, which see him forced to pawn his ring to pay his extended stay at the hotel, and seemingly going through one hell of a midlife crisis.

Deerskin delivers a running commentary on male entitlement. While having not got very far in life, or at least going through a very rough patch, George somehow still expects the world to go his way, and when it doesn't, he flies into fits of rage that are rather amusing at first then increasingly sinister. He also thinks nothing of borrowing more and more money from Denise, under the hilariously implausible excuse of being a film director and needed to finish his film while waiting for the extra funds from his producers, his film a collection of random footage of the mountains made with an old camera. Quentin Dupieux also seems to target the geek culture and how incredibly obsessive it has become over the last decade, by literally giving his lead a yearning for the lamest object you can think of.

Jean Dujardin is totally game and committed, easily switching from endearing and amusing to right down menacing and Adèle Haenel as his suffering companion excels in a role that is very different to anything we have seen of her so far. Her unexpected reaction to the footage of George's film is hilarious!

It is a shame however that, despite a breezy running time of just under 80 minutes, the director seems to run out of ideas after the high concept of his premise and the final act's darker narrative turn seems tagged on for shock values without adding much or taking the film anywhere. At least, the tantalising final shot seems to promise an unlikely but exciting sequel!