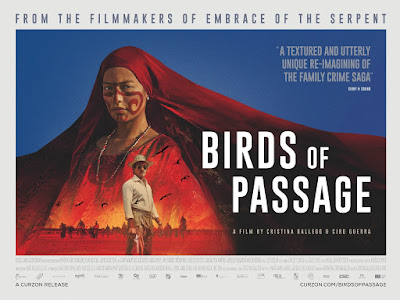 Corruption can take many forms. From Milton’s Paradise Lost to Martin Scorsese’s The Wolf of Wall Street, characters are corrupted, losing parts of themselves along the way as they continue to descend into the depths of their own darkness. This kind of corruption runs through the veins of Birds of Passage, a film about the drug trade that shows the destructive nature that evil can have on individuals and communities.


Birds of Passage tells the story of the impact that the drug trade has on an indigenous group of people living in Columbia. The encroachment of drugs, and the need to control and sell them, causes the lives and ideals of the community to become warped, until they get lost, forgotten and replaced by an ideology of literally bloodthirsty capitalism. Divided into cantos, the film’s structure highlights the ways that things change for the community, begin with an attachment to nature (Wild Grass) and ending in Limbo, with the community lost in the ashes of war.

At the centre of this community, the lynchpin of the film’s corruption, is Rapayet (Jose Acosta). His involvement in the drug trade feels like the moral equivalent of the financial bankruptcy faced by Mike Campbell in Hemmingway’s The Sun Also Rises. When asked how he went bankrupt, Mike replies “two ways. Gradually and then suddenly.” Rapayet’s steps into the drug trade are gradual at first; he sells small amounts of money, his intentions aren’t inherently bad. But the more he stays involved, the more things change, and he’s plunged, suddenly, into the heart of darkness. The changes that Rapayet goes through are literally forced upon the community; signs of changing ways, from new cars, to aircraft in a clearing to transport drugs internationally, cast long shadows over a people who are beginning to get lost along with the man who moulds himself into a kind of leader for them, attempting to lead them through these difficult, changing times, even though the changes have all been brought on by Rapayet himself. 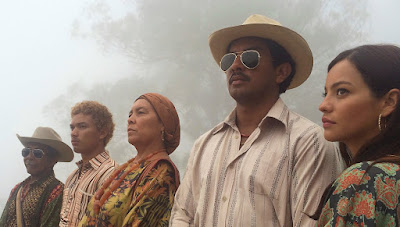 Birds of Passage, as the title suggests, has a focus on things that are fleeting; relationships, fortune, even life itself. All are dwarfed by the movement of the world, by the winds of change. Just as the past is swept up by the world of the drug trade, that new world is lost in the desert; in a breath-taking sequence near the film’s climax, a lonely house in the desert is brought to the ground. Nothing makes it out of life alive.

Birds of Passage never chooses to fully demonise its characters, even as Rapayet crosses the point of no return. The film’s power comes from this innate understanding of humanity, showing why someone would make these bad decisions, and the consequences that come with them. The films has an incredible sense of visual beauty. The film’s heart lies with nature above all else; the natural world, the follies of human nature; Birds of Passage seems to draw out Rapayet’s troubled soul into its visual palette, always trying to find some light in his darkness.

Birds of Passage is out in the UK and on Curzon Home Cinema on the 17th of May.