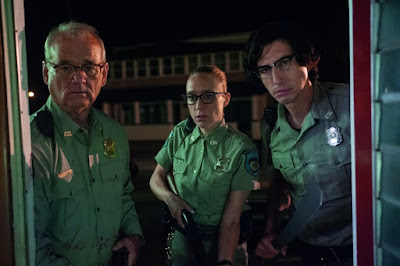 Jim Jarmusch truly is an unmistakably independent director, at a time when the term seems to have been packaged and monetised by certain film studios that offer the same aesthetic and crowd pleasing social themes. It is hard to think of any director with such an incredible run from his early career in the 80's until now and such a unique, timeless style, evidently free from any studio interference yet never self-indulgent. Having recently tackled vampires recently in Only Lovers Left Alive (2013), this time he turns his focus on zombies with horror-comedy The Dead Don't Die.

In The Dead Don't Die, the small town of Centerville, USA is under siege by a hordes of living dead, and it is down to its small police force to try to save the population, with a bit of help from mysterious newcomer Zelda (Tilda Swinton).

Just the same way as Only Lovers Left Alive was completely different from any vampire films made before it, using the genre tropes but being very much its own thing, one would expect The Dead Don't Die not to be the kind of run of the mill zombie films that seems to have proliferated over the last two decades after a bit of a lull in the 90's. Yet it is surprising how much Jim Jarmusch echoes the genre's classics, delivering a loving tribute not just to the undead in cinema but to B-movies of all kinds. Of course, the shadow of George Romero looms large but the director also references some earlier, old school 50's horror and sci-fi films in a pleasantly retro way, presenting us with a slice of small town Americana viewed through the prism of genre. Those films often had a never so subtle political message and here Jim Jarmusch playfully does the same by peppering the film with some purposely obvious contemporary signifiers such as a MAGA nut played by indie icon Steve Buscemi, and a running joke about the locals' barely concealed hostility towards a group of out of towners "hipsters.

This remains a Jim Jarmusch film through and through however, and it is interesting how he manages to imbue this rather unusual premise for him with his own deadpan style and nihilism, with the languid pace and the subtly eccentric characters, an intriguing combination which unexpectedly works beautifully.

The film is not just looking at the past however, The Dead Don't Die offers an interesting commentary on modern film audiences/lovers and how to handle them as a film director/scriptwriter. Newer generation have been able to access films and build an encyclopaedic knowledge of films at an early age in a way that was unthinkable for previous generations, meaning it is difficult to surprise them and defy their expectations, especially genre fans, considering how savvy they have become. As a response, in The Dead Don't Die the director plays with his audience and not so much breaks the fourth wall as blast it with a shotgun, with some of his own characters being often one step ahead of the script, just the way film fans are these days. The film is also filled with meta, knowing jokes that are so bold and I mean bold with a capital B, pun intended, I cannot think of any other directors who could have pulled it off without coming across as smug or too smart. I am thinking of a joke involving Adam Driver in particular that is so hilariously predictable yet Jim Jarmusch runs with it with a commendable nonchalance. 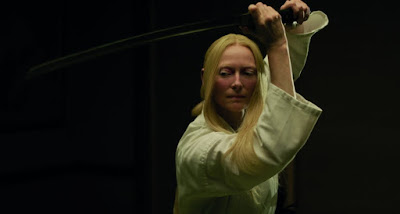 While not particularly scary or even trying to be, The Dead Don't Die still has some pleasant touches of gore with a whole lot of beheading and innards munching. It is also surprisingly beautiful at times, poetic even, with his usual cinematographer Frederick Elmes using the same otherwordly palette of blue, black and orange hues he used in Only Lovers Left Alive.

An ensemble cast means that few of them are more than mere cameos, although you have to love those by Iggy Pop and Carol Kane. While Bill Murray does not really do anything we have not seen him do before, Adam Driver and Tilda Swinton are the real stand outs however. The former, already delightful in Patterson (1996) and becoming a Jarmusch-esque actor to the max, is hilarious as a pessimist police officer, with some of the best lines and delivery, and the latter impressing in an iconic part as a sabre wielding Scottish mortician, a character to add to her gallery of fabulous oddballs yet one she never feels the need to overplay.

Jim Jarmusch, arguably one of the finest contemporary directors and one who has remained faithful to  his roots while always willing to experiment, has a delivered a brilliant horror-comedy that is just as singular as he is. You have to love the way a zombie film just opened the biggest, more glamorous film festival in the world and this is the best Cannes opener in years!