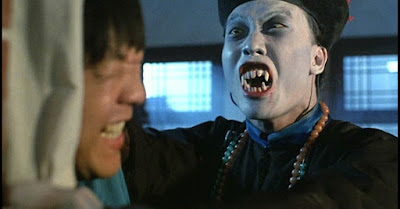 A hybrid of comedy, horror and martial arts, this franchise spawning Hong Kong classic is about a Taoist priest (Lam Ching Ying as Master Kau) and his two rather inept assistants Man-choi and Chau-sang (Ricky Hui and Chin Siu-ho) and their attempts to help contain and, if required, fight the undead. When they are asked by Mr Yam (Ha Huang) to arrange the re-burial of his father they discover that the body has become a vampire and that they must protect Mr Yam's 18 year old daughter Ting (Moon Lee).

Why haven't you seen it?
When talking to movie fans I find that they go one of two ways on martial arts cinema, either they love it and immerse themselves in the genre or they've seen Enter The Dragon and some of Jackie Chan's US films. Mr Vampire is a film I suspect won't have crossed over to that second group, but it should and could be an interesting gateway drug for them.

Why should you see it?
It's a comedy martial arts movie with hopping vampires. So, I'm done with this section, right?

In all seriousness, the challenge with any genre hybrid is getting the balance of elements right and this is one area in which Mr Vampire excels. Not only does it manage to balance the levels of action, comedy and horror but it combines them well in many of its setpieces. The opening is a good example of this. As well as establishing a creepy mood with its slowly but inexorably hopping vampires it shows us the kind of graceful slapstick kung fu that we'll be seeing throughout the film and introduces the different styles of the cast. It also gives us some laughs thanks to Chau-sang appearing dressed up as a vampire to scare Man-choi and gracefully introduces many of the elements of Taoism that will come into play during the film, without a massive exposition dump.

The directorial style of Ricky Lau shifts a little depending on what kind of scene he's doing. The martial arts scenes are clearly influenced by the kung fu comedy of producer Sammo Hung and by his opera brother Jackie Chan, but when the storyline of Chau-sang falling for a ghostly woman (Wong Siu-fung) the smoke filled and otherworldly atmosphere strikes closer to something like John Carpenter's The Fog, at least until the wire work begins. 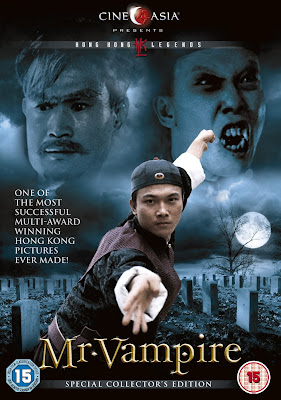 Comedy can be very geographically specific and, with much of this film tied up with intricacies of Taoist belief that won't be familiar to most Western audiences you might expect that to be an issue, but slapstick needs little translation and, while it might be a bit broad for some tastes, the comedy translates. The martial arts aren't the most intricate in Hong Kong cinema history, but Chin Siu-ho's choreography is interesting for the way it mostly seeks to block or deflect rather than to attack (the priests often have to protect the undead as much as they do the living). One of the more ingenious moments comes from a bit of Chinese vampire lore, that they detect you by your breathing, so Man-choi and Ting, trapped in a wardrobe, use a bamboo pole to redirect their breath.

Lam Ching-ying is for me one of the great unsung kung fu movie stars; a charismatic and versatile actor as well as an incredibly gifted martial artist. He became iconic as Master Kau, reprising the role many times before his premature death, 20 years ago tomorrow. You can see why, it's an assured performance, the whole thing summed up in the tidy movements that his fighting style consists of, even when he's on the losing end of the battle. Lam radiates confidence, knowledge and authority, but he's also able to play the comedy of his frequent irritation with his hapless assistants in a way that feels in keeping with the character. Ricky Hui and Chin Siu-ho start out with essentially the same role; comic relief, but it's clear that the more classically handsome Chin is going to be the one who gets to expand from that. It's the right choice, the comedy is broad, but Hui plays up to it and gets laughs while Chin gets to show the prowess that allowed him to choreograph this and many other films.

It's also worth mentioning, though you don't see his face, Yuen Wah, famed as the bad guy with the staccato kung fu style in Dragons Forever and Eastern Condor, plays the main vampire. The other notable name, making her debut here, is Moon Lee. In this role Lee is cast as a demure beauty for Hui and Chin to fall for – something she does essentially effortlessly – but she would later carve out her own niche as a star in many of Hong Kong's 'girls with guns' action movies. It's interesting to see her in a different context here.

Mr Vampire is an ideal introduction to the wider world of kung fu cinema. It deliberately makes clear the more esoteric cultural references and it combines generic tropes to entertaining effect, all of it anchored by an underrated actor in his defining role. I urge you to give it a go.

How can you see it?
There is a US DVD, but the definitive edition is the UK DVD by Hong Kong Legends (which, happily, was one of the few titles re-released by Cine Asia). The picture quality is about as good as you could hope for, given the age of the film and the transfer, but it's the exceptional commentary by Bey Logan that makes it the only version worth owning.
at 20:00