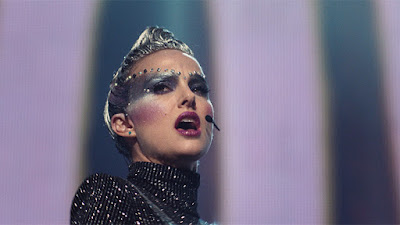 The transitional months between 2018 and 2019 have seen a significant number of formidable female-led musical films, and Brady Corbet’s much touted follow-up to his feature directorial debut The Childhood of a Leader has already earned a great number of fans over in the States. Finally, Vox Lux makes its way into British cinemas and on demand.

Vox Lux, unlike Corbet’s debut, is set much closer to modern times, and begins with a young man carrying out a school shooting. From there, we follow Celeste, a survivor of this shooting, who decides to perform an original song at a local memorial to articulate her response to the atrocity. With a sense of what feels almost like inevitability, Celeste’s performance becomes a national sensation, and she’s set on an inexorable path of musical megastardom.


The film itself is split into two halves: the first, “Genesis”, involves itself with the young Celeste’s rise to immortality as a musical force to be reckoned with, along with her older sister Ellie, played by Stacy Martin, the two appearing almost inseparable. As the film moves into its second part, or “Regenesis”, events take a more melodramatic turn as Celeste, a thirty-something pop diva with an adult life marred by addiction and paparazzi at every door, seemingly tries to return to where she stepped out of her normal life and into the abyss of celebrity.

While the characters around Celeste keep their actors throughout the duration of the film, the shift in time within Vox Lux’s two parts mean that our protagonist is portrayed by two actors: Raffey Cassidy plays the young, plucky but savvy young artist, and Natalie Portman takes on Celeste’s years as an established figure in the spotlight. It feels like inspired casting for an actor who found her fame at a young age to take on such a role, and Portman injects the older, rougher Celeste with a real sympathy for the human being trapped beneath an exterior made harsh by years in the public eye, and the vices that come from dealing with that exposure.

It’s a contrast that is well done for the most part, but the decision to split the narrative with such a wide gulf between the first part’s end and the second part’s beginning feels like we’re missing a lot of context which the film’s latter half struggles to fill in. Given the omniscient narration of Willem Dafoe throughout, and the use of montage in the film’s first half, it feels frustratingly reluctant to fill in the necessary gaps. This sudden need to catch up on 17 or so years of backstory causes Vox Lux’s momentum to stall quite abruptly, and despite some great performances from Portman, Cassidy and Jude Law as Celeste’s manager, this second part sadly never quite makes the impact it’s aiming for. The film’s saving grace is its soundtrack, which moves between infectiously fun pop songs written by Sia, and a much more understated orchestral score by the late Scott Walker. The dichotomy between the “addictively tacky” (Corbet’s own words) pop music and Walker’s ominous compositions both reinforces and heightens the film’s themes of contradiction and chaos.

Brady Corbet leaves the film almost without a climactic moment, as though this is a story still very much in the telling. Given its subtitle, “A 21st Century Portrait”, revealed like a punchline as the end credits begin to roll, that decision to leave the film feeling almost unfinished is very likely a deliberate choice, rather than any shortcoming of his storytelling.

Given the film starts with a school shooting in the late 1990s, and has both chapters punctuated by one very real atrocity and one fictional terrorist attack, culminating in an atmosphere of ambiguity and uncertainty, it seems apparent what the film is trying to say in relation to modern history - at least from an American standpoint. In a post-film Q&A however, Corbet was loath to put any specific meaning on the film and suggested that its merit as a 21st Century portrait may not be able to be properly evaluated for a couple of decades at least. Like its main character, Vox Lux has a lot that it wants to say, but if it wasn’t for the songs it might not have been able to say anything at all.