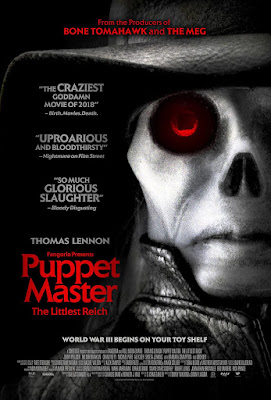 You already know if Puppet Master: The Littlest Reich is your thing. One must appreciate such a specific title that’ll either make you shake your head or become giddy with anticipation for Nazi doll murder. It’s exactly as you’d expect, a sleazy film full of Nazi dolls that go on a -- and I CANNOT stress this enough -- ridiculously goofy and grisly murder spree.

Set in modern day at a Texas hotel on the eve of a convention, the content is souped-up B-movie schlock, but lacks the aesthetic to conjure up the charm of B-movies. The original Puppet Master imagined itself as a Roger Corman-esque film for the VHS slasher era. The Littlest Reich feels out of place in modern horror, and doesn’t conjure up nostalgia (save for maybe die hard Puppet Master fans). Its images look like they’re from a DSLR while its effects are intentionally overblown and fake, making it appear poor instead of purposely imperfect. The limitation of B-movies -- and where the inherent charm comes from -- is that they lacked a budget and instead relied on creativity. The pairing of “low content” with thoughtful craft gave B-movies a dirty allure. The Littlest Reich unfortunately feels more in line with a Saw knockoff than a Corman homage.

Its mode of violence is provocative while the dialogue attempts to poke -- veering between deadpan and offensive. You almost expect the words “snowflake” to be uttered. Scenes of death after death in a cheap hotel occur, with little to no tissue and rhythm. The filmmakers delight in the cutting of limbs and flying of organs, which dive into “too far” territory, but there’s little beyond this midnight-movie content (though the title animation is fun). The Littlest Reich is all a bit much, trying too hard to be nasty, but also is far too weak in story and comedic attempt.

Thomas Lennon as a comic book artist is a solid anchor as lead (though wildly underused), while Barbara Crampton, of Re-Animator legend, is a delight to see pop up. But as both a sequel and reboot it suffers in its performative reconstruction of the original. The intentionally wooden acting, sloppy editing, and cheesy effects don’t inspire nostalgia or conjure up any sort of defined personality.

One probably shouldn’t get too worked up about the politics of a Puppet Master film, but using Puppets as Nazis -- that the audience is supposed to cheer on -- feels a little problematic, and from a storytelling perspective is muddled. A more creative film could’ve critiqued the film’s own audience of horror/comic geeks, which is already set up in the text with the convention attendees and a comic book artist as lead. It seems like a no-brainer, but such thought isn’t present here.

For fans of the Puppet Master films this will likely be a decent enough bloodbath, but if you’re unfamiliar or simply just curious, this isn’t worth watching. It’s intentionally trash, and The Littlest Reich is no more than an offer to peek at something gross. You’re either in or out on this bloody schlock-fest from the first few moments. It’ll be amusing for a specific type of horror fan, but for a franchise called Puppet Master you have to wonder what there was to revive in the first place.

Puppet Master: The Littlest Reich is out in the UK on the 19th of April

Beware, this is the red band trailer!