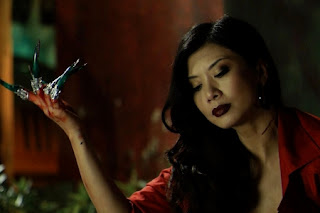 I have stumbled across the trailer for a rather intriguing French film, called Red nights in English, which makes it sound like some bargain basement 80's action movie. The full French title however actually means The red nights of the jade executioner, whose pulp/exploitation tones give a fairer image of what the film is actually about.
Shot in Hong-Kong by two French expats, Julien Carbon & Laurent Courtiaud, the film tells the story of a wealthy and excentric Hong-Kong woman (played by Carrie Ng) who turns out to be a sadistic and deranged killer, who takes great pleasure in inflicting pain on prostitutes she picks up, in increasingly cruel and elaborate set ups. 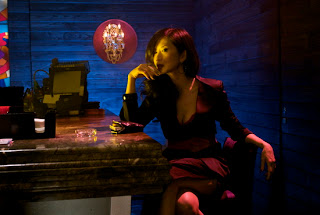 It is refreshing to see that a younger generation of French filmmakers is taking more risks, and paying tribute to all sort of B movies. There are exceptions of course, but the only genres that the French seem to be able to do is Film noir, and its by-product: the "polar", a police-centered type of drama that was very popular in the 80's. However, how many good French horrors do you know? (Ok apart from The eyes without a face, and Switchblade romance possibly). Let's not even talk about heroic fantasy. 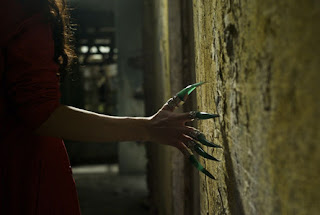 Hot on the heels of the experimental Amer (2011), which was a loving and cinephilic tribute to Italian giallos, this new one is a throwback to the sort of exploitation film you might see in a cinema in some back alley in Hong-Kong where you can still smoke. Judging by the trailer, this film looks exquisitely shot, taking full advantage of the very cinegenic Hong-Kong location, all in neon lights, with a pair of impossibly stylish and mysterious Chinese and French actresses, Carrie Ng and Frederique Bel. 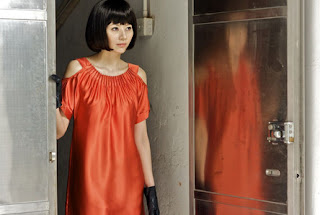 But it is the real attention to details that sets it apart. This is the work of a pair of esthetes, who fill every shot with all sort of fetishist symbols. It does indeed look like what The story of O remake might look if done by Wong Kar Wai, featuring his version of a female Freddy Kruger (and I truly cannot find a better way to sell it). 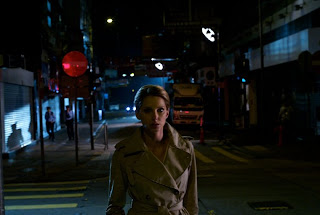 The film came out in Hong-Kong two years ago, and has only just been released in France this week. There is no word of any release in the U.K. or U.S. but I shall hope we will have to chance to catch it at a film festival at least. And for any reader in France and Hong-Kong, I would love to hear your comments!