With the worse possible timing for film blogs, Blogger suffered its own PS3 moment and was down for a few days during the first few days of the Cannes Film Festival, while some posts got deleted. So I have not been able to write about Cannes much so far and what I did write got deleted. But moving on! The festival went on to a fairly good start so far. This is a round up of the films on day 1, with slight delay!

We need to talk about Kevin by Lynne Ramsay 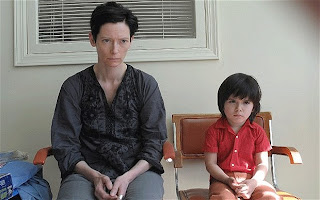 The first film of the official selection to be projected, and the only British film in competition (financed by the now defunct UK Film Counctil), so no pressure then! I remember seeing the cover of the book it's based on a lot a few years ago, the title and picture made me think it was about an upper middle class family from Islington and their slightly naughty son with ADD, the kind of trash that upper middle class parents like to read with a concerned look on their face. It turned out to be something darker and much more interesting than that, about a middle aged career woman facing the aftermath of a Columbine style shoot out committed by her own son.

The film has been generally well received, many reviewers described it as a harrowing and compelling experience. The Guardian described it as Elephant from a female point of view. Others bemoaned the visual gimmickry that did not let his characters breathe and develop, and prevented it from being quite as disturbing as it wanted to be. One thing everybody agrees on is the powerhouse performance from the incomparable Tilda Swinton (who also co-produces) and who is the one to beat for the best female actress next Sunday.

The first film by Australian director Julia Leigh was not quite the disaster I anticipated. There is something about arty soft-porn that makes it so easily preposterous and laughable, and it seems that the film has avoided that. The story of a student who becomes a sleeping beauty for hire for lecherous old men has intriguingly led some critics to describe it as a sort of darker, grown up version of Sucker Punch (and of course they share the same leading lady, Emily Browning), and some have praised a visually inventive style and a mysterious story. The trailer actually reminded me of the Polish scenes of Inland Empire for some reason, with the style of the interior design and the dreamy feel. A lone voice predicted a best female prize for Emily Browning but this seems rather unlikely. 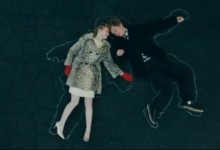 I was wondering on my previous post why this once Palme d'Or winner had been relegated to the Un Certain Regard of the official selection, and given the quasi unanimous reaction of the critics, we now sadly know why, his latest effort is a let down. It has been described by The Guardian as Gus Vant misguided take on the quirky indie teen rom-com, a genre which should really be dying a good death in the near future if I had my ways. It is in the American director honour to try a different direction, not something he has ever been afraid of, but his inspiration seems to have deserted him. A lone voice, French paper Liberation has heaped praise on it, but with such a pretentious review that it does hit more harm than good.