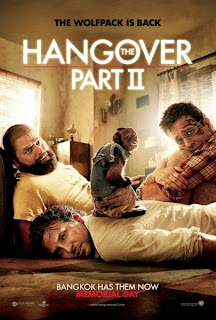 There are some experiences in life that, once you have missed them, are just lost forever. Your best friend's wedding, a week in Ibiza with your best mates, that person you were too shy to approach at a party and never saw again... This is how I feel about The hangover. Already well aware of the ever growing hype, because of a few flaky friends who let me down, or worse, went to see it with somebody else, I actually managed to miss it on the big screen. (And I do go and see everything and anything, hell I paid to see Red riding hood!). And now, unless I rent a cinema and hire 300 people to pretend to laugh as if they had never seen it, I will never get to experience what it was like to watch it on a big screen in a crowded cinema.


I have to admit when I finally did get to watch it on dvd with somebody who had already seen it and cracked up laughing the whole time, after months of hype, I was distinctly unimpressed. I thought the film lacked pace, and was just not quite as funny as I expected, but then I had set the bar so high.

So I took no chance and decided to see the sequel on its Friday opening night with a few friends, after a few beers, in a packed cinema. This new outing sees the wolfpack in Thailand, as Stu is about to get married to somebody who is really worth it this time. The night before the wedding, the guys have a few drinks by the beach with the bride's brother. What could possibly go wrong?...

It is interesting to see how much of a carbon copy of the original this new sequel is. Despite the completely different setting (Bangkok after Las Vegas), the structure is identical to the original. It is almost like the director has unashamedly given the audience what it was clamouring for, and took no chance after his disappointing Hangover follow-up, Due date. So yet again we follow the guys on the trail of clues after a night of mayhem, with a missing member of the party and a wedding to attend in a few hours. 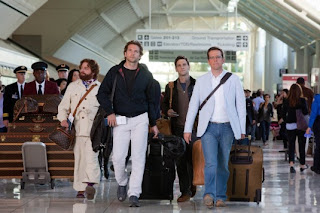 The best idea of this sequel however is having relocated to Bangkok. While it could have been lazily moved to Miami, or somewhere in Europe, the Thailand capital gives a shot in the arm in the franchise. It allows for crazier, raunchier jokes than the original, and, despite a slight slump half-way through, I did find it pacier than the first one. And there are certainly some hilariously shocking gross out jokes that push the limit of what I have seen in an R rated comedy! (It is a shame that this was not done in 3D as originally planned as I can only imagine the the horror of bodily fluids squirting at the audience in full 3D glory.)

But what really makes the film is the chemistry between the three leads. This is all the more obvious having just watched Hot tub time machine on dvd the day before, which was a sad attempt to the same kind of gross out comedy (with added 80's nostalgia), with a cast of particularly unappealing leads. No such problem with the wolfpack, and it is their inherent likeability that yet again make some of the riskier jokes palatable, and whose sweet nature is giving both films a wider audience than the average adult comedy.

It is a shame that Heather Graham did not return (she is replaced by a Ladyboy!), it is a real shame that Mike Tyson DOES return, amping up the cringe factor, and the baby is replaced by an adorable monkey with some obvious comedic talents (I would happily see him get his own spin off film) And then there is a welcome return of Mr Chow in a bigger role. 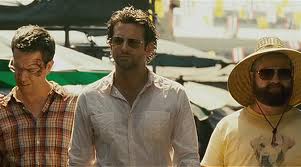 My main complaint with the original was that the last few minutes with the pictures montage showing what the boys really got up to was the best part and I thought this was what the film should really have been about, or at least show more of it, even in flashbacks. It is not too much of a spoiler to say that the film ends with a similar and frankly hilarious photo montage that is even more outrageous.

I have to admit to be puzzled by all the reviewers who hailed the first one as one of the best comedies ever (it was not), only to shoot the sequel down in flames. The biggest criticism you can have is that it is much of the same so I cannot understand the (slightly predictable) backlash. This might break no new grounds, and the originality and freshness of the first one are long gone. But make no mistake, this is still probably of the best bromedies for years to come. Have a few beers, bring your best mates, see it in a packed cinema... and you will enjoy it for sure!

UPDATE: The Hangover 2 is smashing all records at the box office, and is on course for a $135m 5 days week end, which is even better than the most optimistic predictions. As such, there are already talks of a threequel, with several cast members and the director tossing around Amsterdam as the next destination. They will most definitely do something different this time, it just cannot be a carbon copy of the first two!