The Brothers Quays, Kylie Minogue and the lesbian werewolf 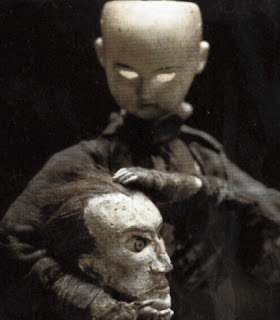 I just love the way I never cease to be surprised by some film news. And indeed this is one of my favourite thing about cinema, the constant source of surprise, being the unexpected quality of a film, or just some unusual association of talents. Just over the last two weeks, we had Shakespearian British director Kenneth Branagh unexpected take on a Marvel superhero, Thor. Then we had period drama specialist Joe Wright, taking on the unusual modern and dark fairy tale of a teenage assassin in Hanna, featuring a pumping Chemical brothers sountrack. However, this is truly something else: the brothers Quays have been asked to direct the animated sections of otherwise live action lesbian werewolf romance Jack and Diane.

And it gets better, Kylie Minogue is in it (hopefully for a longer part than the green fairy in Moulin rouge). I wonder whether she'll get to play some foxy werewolf? Also in the cast, rising British star Juno Temple (Kaboom, The dark knight rises), playing lead character Jack. Quite why they had to pick a guy's name for one of the girl's character (Jack) is anyone's guess, since it makes the lesbian romance between the two characters less obvious in the title.
The film, directed by Bradley Rust Gay (whose IMDB credits bizarelly include a film shot in Iceland, in Icelandic!), is about a lesbian romance, as you had already guessed it, marred by the small issue of one of them being a werewolf, and that is intriguing enough as it is. Ginger snaps with a lesbian twist?
But it is of course the association of the brothers Quays that makes this project so exciting. Obviously at this stage we just do not know where the animation scenes will fit in, probably some dream scenes. Unless the director has gone for a completely leftfield approach, and rather than use cheap CGI or animatronic, intends on asking them to make all the werewolves scene shot in stop-motion.
The brothers Quays are identical twins and incredibly talented directors, specialised in the surreal and the bizarre, and responsible for a whole lots of shorts and a few feature length movies, that were never obviously destined to reach a mainstream audience, yet they had won them a small but dedicated audience of followers and a unique place in independent cinema. 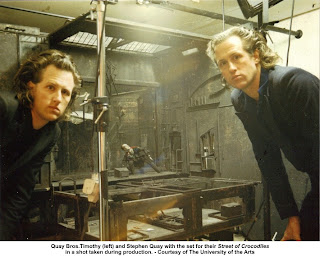 Sadly I have yet to catch their first film, Insitute Benjamenta (1995) which is proving difficult to find, but I was lucky enough to watch The piano tuner of earthquakes (2005), whose title alone should give you an idea of the level of strangeness to expect. The film is a dark fairy tale about a demonic doctor who kidnaps an opera singer, hoping to turn her into a mechanical nightingale. It is a bit of a stereotype to say this but it does truly have a real dreamlike quality to it, with their visual mastery evoking David Lynch, stop-motion master Jan Svankmajer, Canadian maverick Guy Maddin and Peter Greenaway.

Jack and Sarah has just starting shooting, so there is hoping we will get a chance to catch it.
at 14:28