Isabelle Huppert In conversation at the BFI

French actress Isabelle Huppert was presented with the British Film Institute's highest accolade last night at the National Film Theatre in London, the Fellowship, and I was lucky to attend. As per my previous post about the event, Isabelle Huppert might not be quite as known to an international audience as Catherine Deneuve or Juliette Binoche, yet she has had a long and consistantly interesting career that has spanned five decades so far and is showing so sign of slowing down! 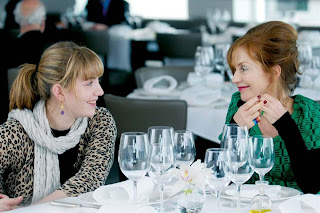 The evening could not have started better with the showing of one of her recent films, Copacabana, which the actress herself accurately described as a melancholic comedy. She plays Babou, a 50 something bohemian free spirit, who has spend her life travelling, never quite able to settle down and hold on to a job and a relationship, with a young daughter in tow. When her now grown up daughter announces that she is persona non grata at her wedding, for fear of embarrasment with her uptight inlaws, Babou gets a job by chance as a time share seller on the seaside in Oostende, Belgium, determined to prove her she has finally grown up.
In the hands of any other actress, the part could have easily ended up as a brash, unidimensional character as a sort of French Edina from Ab Fab. But it is a credit to Isabelle Huppert's talent (and thanks to the excellent writing) that she keeps her character restrained, believable and likeable, adding depth to it with the lingering melancholy of seeing her dreams getting away and a rather aimless life, yet still keeping her streak of fantasy and optimism. Indeed the film itself finds the perfect mix of comedy and melancholy, and manages to say a lot about families and raise few social issues, without hammering down its message. 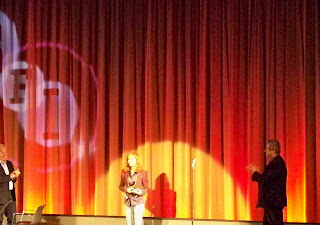 And then it was on the the discussion with Isabelle Huppert. She received a rapturous welcome as she came on stage, which gets to show the admiration she has accumulated among film lovers. She has the reputation for being quite shy while at the same time quite stubborn and cutting even, so I was wondering what to expect but during the whole conversation, which lasted for a good hour and half, she proved to be charming, funny and passionate about her craft. The whole exchange was filmed and will be available online on the BFI shortly so I am just going to go through a few of the interesting points.

If I have one slight regret is that the exchange was conducted in English. Not that her English was not good enough, and I understand a translator would have slowed things down, but I missed her French diction, and we probably missed a few nuances in her answers as a result One of the interesting thing about her is that for such a dedicated actress, she is no big fan of the method acting at all. In fact, she does not torture herself looking for motivations and background info about her character. She believes in the script and the script alone, and relies on her imagination to channel her performances. She amusingly stated that according to her, they are only two types of characters: women who wear flat shoes and women who wear high heels. Not that she does not take acting seriously, which she interestingly described as self expression, filling the gap between how the audience sees her and how she truly is.

One thing that truly transpired throughout the conversation is her love for cinema, and for directors. Indeed it is a curiosity for all sort of directors, especially new ones, which is partly responsible for her great career, thanks to its diversity. What better example than her recent collaboration with Filipino maverick director Brillante Mendoza. She discovered him at Cannes in 2009 when she was president of the Jury, awarding him a special prize for Kinatay, and so impressed that she was with him, describing him last night as a unique and visionary director, she has just finished a film with him called Captured. Not the kind of move you would expect from a "grande dame" of French cinema, yet typical of her passion and eclecticism.

She also mentioned her favourite directors, the late Claude Chabrol, with whom she made 6 films, and who considered her as a daughter, somebody who was willing to let her explore the real complexity of human nature through ambiguous characters. And Michael Haneke, who had been courting her for years, offering her the lead part in Funny games and Time of the wolf, before she finally accepted the part of The piano teacher, whose script she only fully read on the plane on her way to the shoot. She was horrified yet there was no going back and she said it was one of her hardest (and best!) performances.


Asked if she had ever been tempted to direct by a member of the audience, it was a categoric no, although she did read an interesting story on a magazine on the eurostar on that same day, which she said woud make a great movie, so you never know... And asked which director she would have loved to work with, she mentioned Alfred Hitchcock, which is no surprising given that Chabrol was often called the French Hitchcock.


And then that was it, it was time to formally present her with the fellowship, with a standing ovation from the adoring audience, and she was gone. There is just something about French actresses that makes them so unique, their charm, their stubbornness but above all their real passion for cinema. There is no denying Isabelle Huppert is one of the truly great, and the best part is to think where her curiosity in her choice of parts will take her next.