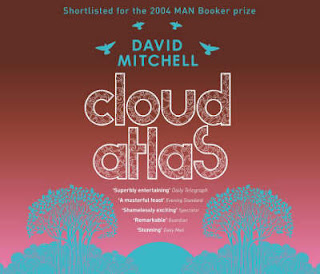 What is the film you are expecting the most of for 2012? Is it The Avengers? Is it the Superman reboot? Or is it Terrence Malick's new film, produced in record time, and said to be even more experimental than The tree of life? I, for one, cannot wait to see the Cloud atlas adaptation. And why is that? Where to begin! The unusual source, the unusual collaboration of three very different directors, the unusual A-list cast...


Cloud atlas is not, as I mistakenly believed while reading about it at first, an adaptation of Atlas shrugged, by everybody's favourite Russian-American objectivist, Ayn Rand. Rather it is based on the book of the same name by British writer David Mitchell, with a complicated structure that encompasses six different narratives threads, all in different period of history, with characters being passed on like batons in a relay course. Those different stories are like Russian dolls wrapped in a timeline that resembles a Moebius strip. Some of it is set in a dystopian future, another part is set on a Pacific island in the 19th century, etc... yet they are all interconnected.


The film is being directed by both Tom Tykwer (Run Lola, Run) and the underrated Wachowski brothers (or should I say brother and sister as Larry Wachowski has now become Lana Wachowski). While the German director has made nothing of interest since his original hit, The matrix directors, while never finding the same success after their sci-fi trilogy, have consistently pushed the boundaries of experimentation under the premise of blockbusters, with a impressive visual flair.

Indeed I do hold Speed racer as one of the most underrated film of the last decade, a sensory experience that married genres and produced some astonishing visuals, part pop-art, part video game, part "what the hell were they smoking?"


Amazingly, they have managed to put together a budget of over $140m, and a proper A-list cast, which for such a leftfield project is all the more surprising! Joining them, Tom Hanks, Halle Berry, Hugo Weaver, Susan Sarandon... In an interview, Hugo Weaving explained that he actually played no less than 6 characters in this!

I am not quite sure how they will manage to fit in 600 pages of a complicated novel into a feature length film, especially since the episodic nature of the story might have been more suited to a tv serie. This will really be make or break for the notoriously media-shy brothers. But one thing is certain, you cannot accuse them of having rested on their laurels and being risk-adverse! The film is set to be released in late winter 2012, which has become a new ground for more fragile blockbusters to be such as The watchmen and Sucker punch.
at 22:40