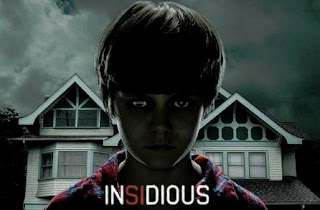 I watched Insidious as soon as it came out in the UK and I loved it. Not only that, while so many films make a big impression on me at the time, only to be instantly forgotten, this one has been lingering at the back of my mind like some vengeful spirit in waiting. The reviews were fairly positive, however there seems to be a consensus, as well as among the IMDB board, that the more suggestive first half is vasty superior to the second one where all hell break loose (literally), and I am not sure I agree.
If anything, I am beginning to find the whole suggested, jump scare thing, which works so well when carefully handled, a little easy, lazy even. It all started with The Blair witch project, one of the most crushing bores I was ever subjected to. I defy anybody to explain why exactly this was meant to be scary. "It was all suggested" I hear you say, which to me is the equivalent of film students finding symbols in every single scenes of any arthouse movie they watch. Yet there was no atmosphere, no tension, no build up, and it all came to a particularly unsatisfying ending.

One film that did this so well was The others with Nicole Kidman. While hardly anything was ever showed, it did manage to creep up the atmosphere, thanks to the gorgeous gothic setting, the careful use of the sound effects, and the slowly managed build up up until THAT twist, not the mention a career best turn by Nicole Kidman (as far as I am concerned). And then of course there was the recent Paranormal activity, which I managed to avoid, due to a brief and regrettable period of aversion to loud jump scares, also which also played with the "Let your imagination do the work" motto.
Obviously I want to use my imagination, but mostly, if I am going to the pictures, I am paying for somebody else to use their imagination for me! Otherwise I'd read a book!
If anything, I found that Insidious managed to bring the best of both worlds, just like some masterpieces of the genre, like Shining (not that I am saying they are comparable in quality!). It started off with a slow build up, with the usual silent bits followed by jump scares, that were efficient but did not amount to much, and I would have found it a big letdown if it just lead to a rubbish, anti-climatic ending.

Instead, it truly came to life (so to speak) with a completely over the top second half (with the welcome appearance of the ever so reliable Lin Shaye (There's something about Mary, Snakes on a plane) and sidekick (and film co-writer) Leigh Whannell) where the action and tension were cramped up, never to go down again. 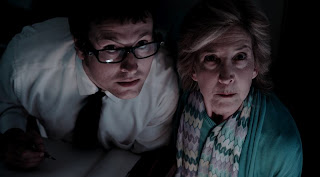 I particularly loved all the imagery. Thankfully it avoided the done to death CGI demons with fast moving head on still body (which has been a staple of horror films for the last decade), or the Ring/Grudge inspired roof-crawling ladies with twisted limbs and dark long hair. Instead, all the ghosts and demons had a real old fashioned look to them, which borrowed from old fairy tales illustrations, German expressionism cinema and the 1920's Danish witchcraft movie Haxan in particular.

Interestingly, even though the marketing was hammering down the Saw connection, since both films were directed by James Wan, it had more in common with his little seen and underrated Dead silence (2006), which also had an old fashioned spooky funfair atmosphere to it. And I am hoping that the director is slowly finding his own personal style and will follow it up.