I have said it countless times and I will say it again and again, what I love the most about cinema is that it constantly surprises me. Unexpected films from far corners of the world, unexpected association of talents... And what better place than a film festival, or the best film festival in the world even, to come up with surprises. The artist by Michel Hazanavicius, which was a late addition to the official line up, only announced just over a week ago, and which seemed like a gamble given the unlikely subject, has taken the festival by storm. It is the best reviewed so far and an unexpected yet strong contender for the Palme d'or next Sunday.
The film, a loving tribute to silent Hollywood movies, and itself a silent and black & white film, has received rapturous applause during the press screening yesterday morning, and a ten minutes standing ovation during the gala screening with the cast and crew last night. It follows George Valentin (Jean Dujardin), a silent film star broken by the advent of talking cinema and its romance with ingenue Peppy Miller (Berenice Bejo). 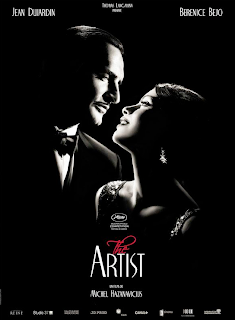 Reviews have described it as charming, funny and moving, but more importantly, earnest. This is no spoof going after cheap laughs, this is the work of a true lover of that type of cinema whose film is serving his passion, not the other way around.
The cast and crew's name will mean nothing to a worlwide audience but both the director and the leading man are big names in France. Michel Hazanavicius built its reputation on funny and cutting edge tv programmes in the 90's before graduating to full features with french spoof spy OSS 117: Caire nid d'espions, and its sequels, Oss 117: Rio ne repond plus, both big hits in France and loving tributes to the sub genre of French 70's spy films. 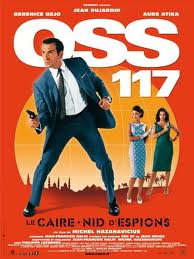 They already featured The artist's Jean Dujardin, as a deliciously suave but dim-witted and scandalously un-PC spy, a symbol of assured masculinity, at a time when real men had strong, hairy chests and no cosmetic six packs. On the sole basis of the trailer and the reviews I read, I would also place him as a strong contender for best actor next week.
And coming back to what I was saying about surprises, who could have predicted only two weeks ago, that a French black & white silent film, acting as a tribute to Hollywood films of this era, would emerge as a frontrunner in the race for the Palme d'or? Life, and cinema, are full of surprises!