The Muppets are coming! 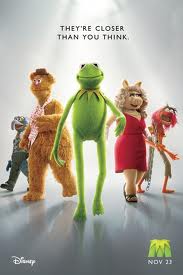 I have to admit, I was dubious when I heard that a new Muppets movie was being produced a few months ago. For the last two decades, they have been involved in a serie of increasingly derivative adaptations, such as Muppets Treasure Island, Muppets' Christmas carol... (what's next, Muppets' Black swan?) And then I was baffled when I read that not only would Amy Adams and Jason Segel take the leads, but a whole bunch of famous faces would join them for cameos (Zach Galifianakis, Katy Perry, Emily Blunt, Jack Black, Danny Trejo, Ricky Gervais...)


I did wonder if the Muppets mean anything for anybody under 35 these days. Plus despite all the nostalgia I have for them, when I actually caught some reruns of the original serie, it did not always quite live up to my memories. Do they really have their place today, for a young audience worshipping all things CGI such as the Chipmunks, with those migraine inducing squeaky voices (in the trailer anyway, I would swallow a stack of needles rather than watch a Chipmunks film).

However on the strength of the two hilarious teasers that have just been released it, it all makes sense: you just do want to watch them in a film, a proper film again, not just targeting a very young audience, but in keeping with the wit and wide reaching humour of their heydays. With a decade of CGI animated films that followed Shrek, showing that the audience has an appetite for family entertainment with more grown up references and celebrity cameos,  it seemed like the perfect time to bring back the furry animals to the big screen.

The best idea of this project is to have kept the Muppets just the way they are, in all their artificial and rudimentary appearance. (Heaven forbid the studio ever decides to give them a modern update of some sort!). I can see how this is going to work both on the nostalgic appeal for an more mature audience, and introduction to a whole new audience.

And what better leads than Amy Adams, who does wide-eyed innocence to perfection, and Jason Segel who is so cuddly he might as well be one of the furry muppet himself. I would have loved to catch that first teaser for supposedly rom-com called Green envy not knowing what was coming! (Mind you I guess I am spoiling it for all of you too now!)


This second teaser with the Hangover reference is more obvious but fun nevertheless I still think it is a bit of a gamble. But if all goes well, like the trailer says, Get ready for Muppets domination!