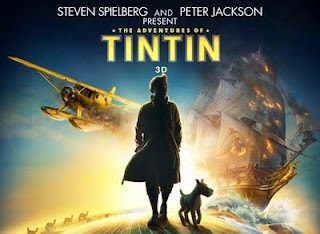 It might be hard to believe but there was more to cinema than the Cannes film festival this week. The great thing about Cannes is that the world could be about to end and the attendees would still be arguing about Lars Von Trier and Terrence Malick. This week, two trailers were released, Tintin and the Fright night remake. And they are both atrocious. And ugly. Where did it all go wrong? 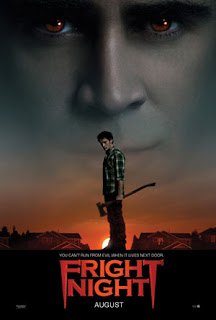 Despite the depressing conveyor belt of 80's horrors remakes churning out worse and worse  offering every month or so, I, for one, was feeling quite positive about the Fright night remake. The original is a much beloved 80's horror about a teen witnessing strange things happening in the house next door, only to realise that his suave new neighbour is a vampire! Helped by campy geek and best buddy Evil Ed, as well as washed out tv horror show presenter, he goes on a mission to rid the world of the undead. As one of the first horror movie I ever watched, it holds a special place in my heart, finding the right balance between laughs and scares, with a witty script and great performances.
A couple of things were promising about the upcoming remake. First of all, it managed to line up an impressive and rather upmarket cast for that kind of films: Colin Farrell, Toni Collette, Anton Yeltsin, Christopher Mintz-Plasse and David Tennant. And director Craig Gillespie (Lars and the real girl) has spoken at length of his admiration for the original. I was excited about it when I saw the first pictures (see my previous post)

But the trailer has destroyed any hopes I might have had. First of all, the photography is incredibly ugly. Having relocated the premise to Las Vegas and its suburbs (which was an odd idea in the first place), the film looks underexposed on night scenes and overexposed on day scenes. (I cannot imagine how badly the night scenes will come out with 3D glasses, given that they darken the brightest images) Plus the setting means you lose the slightly gothic vibe that the original had, without really adding any atmosphere of its own.
Colin Farrell, which I personally hold as a great and underrated actor, looks wooden and when he tries to be threatening, looks like he's just struggling with a bad case of stomach acid. He lacks both the suave charm and the menace of Chris Sarandon in the original. Anton Yelchin looks all wrong for the lead part and lacks charisma, but the worse misfire is Chris Mintz-Plasse. He had large shoes to fill given the iconic nature of the original part and seems to be doing a terrible job at it. The trailer only shows a slight glimpse of David Doctor Who Tennant, but given that the promotional shot of his character was rather baffling, as a sort illegitimate son of Elvira and David Copperfield, I fear the worst. I sincerely the film will prove me wrong when it comes out early September.
And now on the Tintin. A much beloved comic book character in France and Belgium, Tintin is an old school reporter who travels the world in a serie of charming and witty adventures, which convey an old fashioned sense of travel and adventure, with a gallery of colourful and unforgettable supporting characters. He is also virtually unknown in the U.S., so this expensive, mo-cap adaptation seems like a bold move, but surely, in the hands of Steven Spielberg directing and Peter Jackson producing, what could possibly go wrong? (A lot I hear those who saw Indy 4 and The lovely bones say). 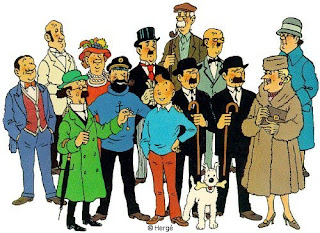 Well the mo-cap can go wrong for once. It does not matter how well written the script will be, how exciting the whole thing is, the mo-cap looks like it's a disaster in this adaptation (Mo-cap, or motion capture, is a technique where real actors are not just doing the voiceover of their characters but also acting the scenes, covered with movement-tracking dots, and are then rendered as CGI characters in post-production, a technique that is supposedly more natural looking than full CGI creations.)

This technique has been baffingly championed by Robert Zemeckis, in a serie of poorly received films such as Polar express, Beowulf, and Mars needs mums, (the latter he only produced, and has become one of the worst box office flop in history). It is a safe bet to conclude that the audience does not like mo-cap, less and less so.

And it is telling that this teaser for Tintin is showing some gorgeously rendered and exotic landscapes, yet is surprisingly shy with characters faces. For a really good reason, the fleeting glimpse we catch shows the disaster that they are. Tintin's head like an Easter egg with weird facial features. They have captured none of the simple charm of the original drawings. Again, I sincerely hope I will be proven wrong. In the meantime, if you live in the U.K., a very faithful and succesful 90's cartoon adaptation has been released on dvd and is well worth renting.