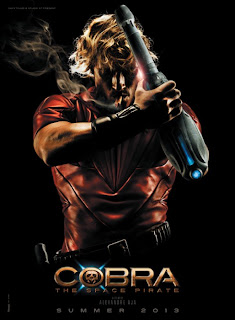 For a second I thought I had been the victim of yet another wishful thinking hallucination. As I was reading  an article on the Variety website, the poster for "Cobra, the space pirate" directed by Alexandre Aja just flashed in front of my eyes. Then off it disappeared. It was not part of a banner or any advert on the site, it just vanished. Just as I was wondering if the website had created some kind of mind reading webcam marketing tool, Minority report style, offering its reader what they really, really wanted, a quick look on the web confirmed that indeed, the French director of Piranha 3D, High tension and The hills have eyes, was hoping to make this his next film.
For those too young to have seen it, Cobra was a Japanese manga later adapted as an animation serie, featuring a (you guessed it) space pirate with stunning blonde good looks, a cheeky swagger and a "psychogun" (a gun attached to his arm). The man was a more obvious display of masculinity than most manga/cartoon characters at the time, a cigars chomping, womaniser with an attitude to match... I was a huge fan at the time. 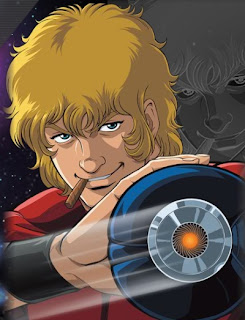 Despite being shown in the afternoon and aimed at children, it was a little bit naughty, which filled me with delight at the time, featuring a bevvy of barely clothed beauties, including his accomplice Lady Armaroid, a naked fembot (yes I realise most robots are naked. But then most robots do not display an impressive pair of assets as this charming ladybot did). I am pretty sure, as a child growing in the 80's, Alexandre Aja must have been watching it and he has probably kept some fond memories of it, hence this new project.

It was certainly a lot more adult than what we were accustomed to at the time with cartoons, and thinking about it, it reminds me of the James Bond films of the 80's with Roger Moore, the kind of family entertainment that blended action, nudity, violence and humour (before getting all too serious with Pierce Brosnan and Daniel Craig).
Apparently this poster has already been put up in the streets of Cannes ahead of the festival next week, so there is hoping Alexandra Aja will manage to get the financing for this project. It would certainly be really hard to get the tone right, and as much as I love his films, I don't know if he has shown us that he is capable of pulling the whole adult/action sci-fi thing yet, but after Piranha 3D, his affectionate tribute to a whole range of 80's creature films, one thing that he will bring in no short supplies is passion!
I have enclosed the Japanese credit of the 80's anime, which is getting me even more excited about the project!