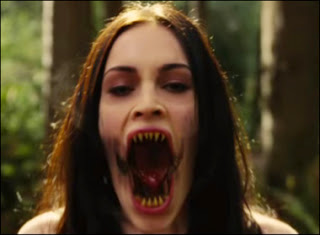 Some movie news truly belong to the WTF category: Megan Fox joining Judd Apatow's untitled new comedy. This is the kind of association that sounds as likely Adam Sandley teaming up with Bela Tarr for a new "comedy".

Megan Fox has had quite a bad couple of years. The flop of Jennifer's body to begin with, which was totally unjustified. Karyn Kusama's dark comedy was largely misunderstood: too smart for the average gorehound, too gory and OTT for the critics, I actually found it to be one of the best films of 2009,  a cunning tale of female empowerment with a lesbian twist and a fantastically dark ending. And both Megan Fox and Amanda Seyfried were excellent in it.

Then the very public feud with Michael Bay which saw her resigning/being fired from Transformers 3. And to top it up, the huge flop of Jonah Hex, which for some bizarre reason was attributed to her even though she had a supporting part, while leading man Josh Brolin escaped with his career intact. Is she a spoilt brat, or is she the sad example of a too smart and powerful woman in Hollywood who gets brought down by a still very misogynistic industry?
Judd Apatow (The 40 year old virgin, Knocked up) is one of the best directors working at the moment. He just has the knack to create some of the most likeable and believable characters, along with an impeccable comic timing. I have grown tired over the years trying to explain to unsuspecting friends all the good things I thought about The 40 year old virgin, as they could not go past the silly title.


His new film is actually a spin off of Knocked up, reprising the supporting characters played by Paul Rudd and Leslie Mann and giving them centre stage. This is excellent news as they were the best thing about the film (I cannot actually remember any of the scenes of leading actors Seth Rogen and Katherine Heigl). Plus I absolutely adore Leslie Mann, she has one of the best and most deadpan comic timing and it is about time she gets a leading part after a serie of supporting ones.
No word as to which part Megan Fox will be playing although she is definitely in good hands with Judd Apatow and this is a smart choice for her career, showing that she is willing to try something completely different. The as yet untitled film will be released in 2012.
at 19:13