I saw the trailer for Pina for the first time today, the documentary by Wim Wenders about the late German choreographer/dancer Pina Bausch, and it looks absolutely fantastic. Pina sadly passed away just as pre-production had begun on the film, but the director decided to carry on with the project, which now serves as a tribute to her. 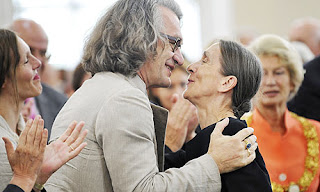 The trailer was in 2D, and I have to admit I am not very familiar with her work, apart from what I saw in the Pedro Almodovar movie, Talk to her. Still, it looks absolutely fantastic and, to me, it seems like an ingenious use of 3D, that shows that it is not all a gimmick that has things flying at you. I can just imagine how much more of an intense viewing experience
it will make.

I have read that some purists balked at the idea of some of her most famous pieces being recreated in outdoors settings but it seems to work really well, and a more cinematographic proposition than merely posting a camera in front of a stage. 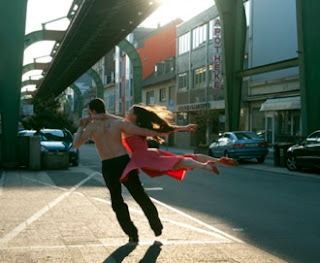 Wim Wenders has not had much inspiration with his narration driven films lately, indeed his best film of late was another documentary, Buena Vista Social Club so this looks promising.

Interestingly, another maverick German director, Wernez Herzog, has gone down the 3D road, with his documentary The cave of the forgotten dreams, about the Chauvet caves in France which holds the oldest known pictorial creations of humankind.
While some were already predicting the death of 3D, after a lack of exciting 3D film set for 2011, and consumer fatigue with the format, I am glad the independent cinema is embracing the format. One can only dream about what Wong Kar Wai and David Lynch could do with this...

Pina was presented to raving reviews at the Berlin Film Festival earlier this year, and is released on thr 22nd of April in the U.K. and has no release date for the U.S. quite yet
at 20:35