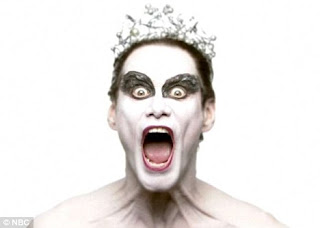 What is it that makes a film so iconic that tv shows such as SNL and spoof movies (such as Naked gun, Scary movies, down to the most awful recent examples such as Epic movie) can lampoon a scene, safe in the knowledge that it will be instantly recognisable by their audience, even by those who have not seen the original film. It is not always the box office success as such (Would somebody attempt it with, I don't know, Dear John or Valentine day, two of 2010 rather big success? Absolutely not, nobody would get it!)
I was just asking myself that question as I came across the Black Swan SNL spoof. It is not particularly well written but thank god comedy genius Jim Carrey makes it absolutely hilarious. And then when watching it, it becomes fairly obvious what made this film stand out so much: the striking imagery, the dramas, the histrionics even... Some films are just ripe to be lambasted!
It is like everybody wants a piece of the Black Swan action at the moment, just as SNL broadcasted this, Natalie Portman's body double comes out with a claim that the Oscar winning actress only did 5% of the dancing (like, who cares!).
Here it is if you have not seen it, the full comedic glory of Jim Carrey as the Black Swan...