Tron lives! The next day, the animated serie, and TR3N

When Tron Legacy was announced a couple of years ago, it was clear that Disney studios saw it as a potential franchise, which is a little surprising considering it was the sequel to a 80's flop few remembered, even though it had gained a cult status. There was talk of a trilogy even.
However while Tron legacy performed better than the original, it was not quite the blockbuster the studios might have hoped for, with box office receipts of about $170m in the US, a good result but not quite up there with the $300m films must reach to gain the true status of blockbusters these days. So I was concerned there was not going to be any follow up to the Tron universe. 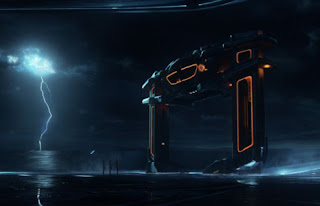 Being a fan of the original, I was completely blown away by the new film. My expectations were stratospheric when I found out a 3D sequel was being made, and they were largely met. Sure, the story was a little slight, but it did have an emotional layer that did not exist in the original. And first time director Joseph Kosinski displayed a very assured sense of direction, respecting the original and iconic monochrome design while dramatically improving on it. Some of the visuals and action scenes left me giggling with excitement like a little kid, with a dazzling display of some of the most amazing visual effects committed to film. And the Daft Punk soundtracks delivered all it promised and more. Only the 3D (or lack of it?) was a letdown due to its lack of depth


But great news, the soon to be released dvd contains a 10 minutes short film that bridges the story between the first two films, while laying on some clues to a potential sequel. A stunning looking animated series is about to launch, acting as a prologue to Tron legacy. And rumours are flying around that the studios is indeed intending on producing a threequel called TR3N, with Cillian Murphy as the villain, playing the son of original bad guy Dillinger/MCP. So it sounds that it might just be the beginning for the Tron universe.