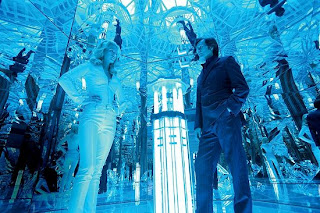 Is it not interesting how sometimes all it takes to get you interested in a film is a picture, just one picture, like this one above from the upcoming X Men First Class by Matthew Vaughan.
I have already discussed the first trailer which is fairly exciting although not showing that much right now (and a good thing that is, pet hate is trailers that do show just about everything that is cool in a film) but this picture above is just fantastic, just look at it. 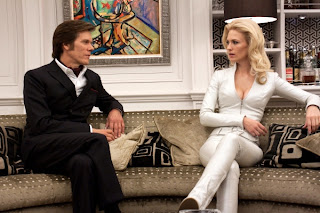 I am loving the Lady of Shanghai reference (with that hall of mirrors), with the added blue sci-fi light. And the whole 60's costume design is awesome (how hard it is these days to do it while avoiding the Austin Powers look), I particularly like the look of January Jones (as Emma Frost) with the Avengers/Diana Rigg looking white skintight outfit.

This and other pictures I have seen make the whole thing look like a Wallpaper fashion and interior design shoot. I am actually suggesting Tom Ford directs the next entry (how do you call the sequel to a prequel? We need a new name!), after the stunning A single man.
As much faith as I have in director Matthew Vaughan and scriptwriter Jane Goldman after Kick Ass, they still have a tough one to pull off. They are trying to make a blockbuster which will need to please the general audience with kick ass action scenes and a tight pacing, without alienating them too much with their experiment in style and design. And they have shown that they can get it wrong sometimes, with one of their previous team effort Stardust. While I enjoyed it very much, I cannot deny that it was all over the place by trying to be too many things at once.
at 01:06