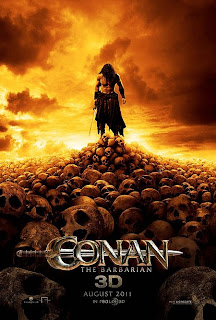 Following my previous post about the Cube reboot in 3D, now come some news of the Conan reboot in 3D. Have we really hit rock bottom in terms of new ideas in Hollywood? I had actually lost track of this project, which had some stage was supposed to be animated only to be turned into live action after all.

Relative unknown Jason Momoa (Stargate Atlantis and erm Baywatch: Hawaiian wedding) takes on the iconic role and, judging by the pictures, is a fitting choice as the missing link between a rugged barbarian and an underwear male model. Fanboys favourite Rose McGowan (Charmed, Planet terror) is in the cast also, herself once tipped to take on the Red Sonja remake.
I actually thought this teaser was an unofficial fan made one, then I thought it was some bootleg footage filmed at the back of the kind of cinema where smoking is still allowed. But no, the weird, viewed through smoke clouds footage is intentional (but then again it is only a teaser). It is actually intended as a remake as opposed to a reboot, yet reading the list of characters on IMDB, none of the names match the original, so it will probably only loosely follow the original.
I have some fond memories of the original, largely thanks to the formidable Sandhal Bergman as the statuesque female warrior/thief who kicked ass! But I did find it a little too serious for an heroic fantasy tale. It sparked a sequel that was high in involuntary camp values, mainly due to the presence of the inimitable Grace Jones as, you guessed it, a female warrior. And then a wave of increasingly cheaper heroic fantasy knock offs followed in the 80's, such as Red Sonja (with Schwarzie and Sandahl Bergman yet again), Krull (with a sci-fi twist) and The sword and the sorcerer, until the genre died a good death. 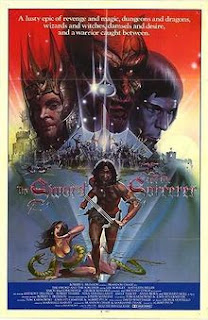 Obviously there was the Lord of the rings trilogy, a revival of some sort, but it does not quite belong to the same type of trashy heroic fantasy, full of violence, busty sorcerers and raunchy warriors. I can only hope this will be successful enough to trigger another wave of this type of films I am so fond and nostalgic of.

German director Marcus Nispel is at the helm, having presided over plenty of remakes already such as the underrated Texas chainsaw massacre (2003) and then the disappointing Friday the 13th (2009). Sadly he also directed the dreadful mess that was Pathfinders (and a kind of Viking heroic fantasy so not sure if it is a good sign!)
Conan the Barbarian will be released in 3D in mid august, the late summer being the perfect release date for that kind of mindless trashy entertainment.
at 12:56