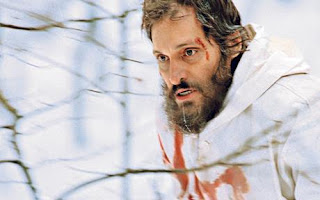 I have only just caught the trailer for Essential Killing by Polish director Jerzy Skolimowski, starring maverick artist/director/self publicist/actor Vincent Gallo, that I meant to watch, and missed, at the London Film Festival last year. And good news, it is finally being released in the U.K. on 1st of April. (no US release date as yet) And Curzon Renoir in London is holding a preview screening followed by a q&a with the director on 24th March (as part of the Kinoteka Polish Film Festival)
which I shall be attending and reporting from.
Vincent Gallo seems to have been more famous lately for his strong Republican views, and for exposing himself on screen at the Cannes Film Festival, where his film, The brown bunny, was described as the worst film ever showed at the festival by Variety. This was a little harsh as I found it an interesting if not totally convincing watch, but we forget how good of an actor he can be, indeed winning the best actor prize in Venice last year for this film. 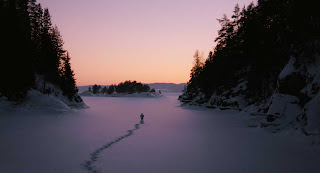 The film, said to be largely silent, is about a Taliban taken prisoner by US army forces and brought to an European country where he promptly escapes and is chased by his captors. Despite the topical subject, it seems to me that the film is not going down the realistic route, which is confirmed by the trailer, with its slightly surreal atmosphere and experimental, arty look. And nice to see the too rare French actress Emmanuelle Seigner (Bitter moon, Frantic), who seems to have been eclipsed by her younger sister Mathilde in the French cinema.
You can book your seat on the curzon website and watch this space for my review and report in 2 weeks.