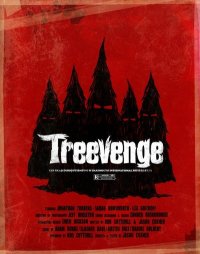 With "Hobo with a shotgun" having just been screened at South by Southwest to great reviews (see my posting about SWSX), I have come across this earlier, short film by Hobo's director Jason Eisener, Treevenge. Jason had originally made a short version of Hobo with a shotgun for a grindhouse fake trailer competion and won. So he made this longer, 16mn short film, Treevenge, to drum up some interest from producers and the audience alike for a feature film. Treevenge shows what happens when Christmas trees decide that enough is enough and take revenge on humans after years of violence and humiliation. 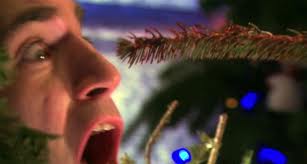 Treevenge is a hilarious and loving tribute to late 70's/early 80's gorefests, that does not forget to have a more serious message underneath, about the plea of our unlucky, pine covered friends and the terrible sufferings they endure for our demented rituals that take place every year near the end of December. Worse still, their youngest, the saplings, are not spared. How would you like it if somebody cut off your limbs, took you away, screwed you upright and covered you with garish decorations for their sick pleasure? 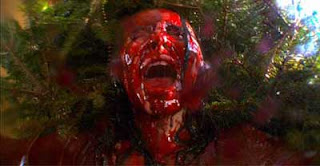 I love the completely over the top acting, the slight references (the incredibly cheesy, hippyish opening score is actually from Cannibal Holocaust), the old school, latex filled gore (not a CGI effect in sight). Yet sadly, I did feel it crosses the line at the end. It is a debate for another day, but as much as I love over the top, gratuitous violence, there are still certain things which are taboo, and what happens in the last scene is one of them. As much as I know is it not meant to be taken seriously, it completely wiped off the silly grin I had on my face.
So decide for yourself, here it is in its entirety. I have to warn you, if it extremely gory, a little too much even. If you are easily shocked, and a cat lover, do not watch this! And if you find the last scene completely tasteless well, so do I so do not blame me!