I am beginning to wonder if Scandinavia is not about to become the Asia of the 2010's when it comes to horrors. Just as the world was becoming tired of shadowy Japanese female ghosts with long hair walking backwards, a onslaught of horrors from Scandinavia is putting it firmly on the map for fans.

First it was Let the right one in, everyone's favourite vampire film set in suburban Sweden. From Norway followed Cold Prey (A slasher film set in an isolated hotel, oooh try that for originality!). Then Norway again with Dead snow, the hilarious nazi zombies movie from young director Tommy Wirkola, who, following the success of this film, has been picked by Hollywood to direct Hansel & Gretel: Witch hunter. His new project will follow grown up Hansel & Gretel having survived the witch to become pro witch hunters, and will star a red hot cast: Gemma Arterton and Jeremy Renner. (Tommy Wirkola had previously directed a Norwegian Kill Bill that was not all that convincing I hear!) 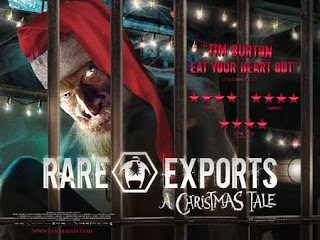 Only recently was Finland showing us a cannibal, child eating Santa in Rare Exports: A Christmas tale. And now, from Norway, comes a movie that is more horrific that a Scandinavian patterned wooly jumper, and which received some brilliant reviews from Sundance: The troll hunter. From what I have read and seen, it can be described as The Blair witch project meets Shadow of the colossus. Filmed as a mockumentary, it follows a group of students as they investigate a serie of unsolved killings. They come across a hunter that leads them to the real cause of the murders: gigantic trolls!
The trailer looks great, and I feel there is an unexploited tap of ideas and stories to be picked on from all sort of Scandinavian fairy tales, coupled with a new wave of young directors emerging from this part of the world and willing to try something new. No release dates as yet in the U.S. and U.K. although I would expect it at least to hit a few horror festivals, if not get a general release.