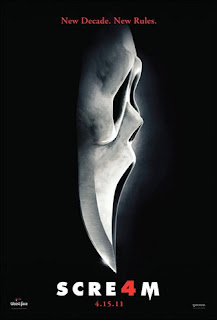 While it is not all that unusual for directors to badmouth their previous effort (ie Michael Bay current and tiresome routine in every single film mag, dissing Transformers 2, while trying to plug the threequel, yawn), it is not often than a director displays a distinct and very public lack of enthusiasm for a film that has not come out yet, unless something has gone really wrong. Yet this is what is happening with Wes Craven at the moment, just about three weeks before the release of Scream 4 (how do a call a third sequel, a Quadruquel? A Fourquel?)

In a recent interview, he has candidly explained how he lost control of this new chapter halfway through the production. The script was originally due to be penned by the original writer of Scream 1 and 2, Kevin Williamson. However Ehren Kruger, responsible for the less well received Scream 3, took over. And the signs are not good as this is exactly what happened with Wes Craven/Kevin Williamson previous collaboration, Cursed, which due to constant rewriting and the studio's interference, lost of all of its original bite and flopped.
I have to admit, I have never found the Scream trilogy to be all that convincing. I love the way it was singlehandedly responsible for making horror movies popular again. Like everybody else, I liked the post modern script, knowingly playing with the genres conventions, and the well written characters (unlike the usual forgettable slashers' fodder). 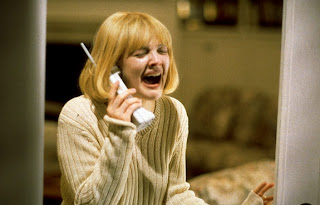 But to my mind, they committed the cardinal sin of having some particularly boring deaths. Apart from the iconic Drew Barrymore's death as the very first victim, and Rose McGowan death by garage catflap, it was all repetitive stabbings, or even worse, a death by gunshot! One of the pleasure of your average slasher is the imaginative deaths, (such as death by harpoon (in the eye!), death by head smashed against shower glass door in Friday the 13th for example), that sudden violence that gives you a jolt... And nothing like it happened in the Scream movies.
I am probably in the minority but actually enjoyed Scream 3, the script was smart, maybe a little too smart, but it did well to tie up all the narrative threads after the rushed and disastrous sequel.
I am not quite sure where they are going to go with the new premise that the original rules of horrors/the original trilogy do not apply anymore. The new cast of characters is not all that original, virginal blondes, movie nerds... It seems that the film start with a famous face (here Kristen Bell) being killed, so nothing new there. Or does that mean we can expect one of the 3 returning characters to die? (My money is on Courtney Cox, it seems implied in the trailer). But then that would actually follow one of the horrors convention of sequels where the survivor of the previous chapter gets killed in the first scene of the follow up (see Friday the 13th, Nightmare on Elm Street...).
Not too long to wait now, a strong opening week end at the box office might even mean a new trilogy is on its way...