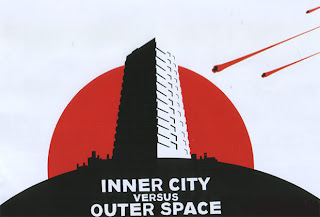 I have already mentioned the lo-fi and widely anticipated British horror/comedy Attack the block (by former radio presenter by Joe Cornish) in an earlier post about Austin SWSX midnight fests. 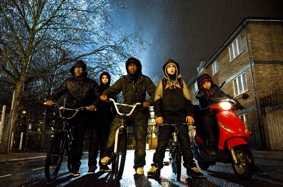 Now a first trailer has finally been released, some lucky few critics have already seen it, prior to its UK May release, and early reports suggest that we might have a cult classic in our hands, we're talking Shaun of the dead level cult classic here.

The trailer looks brilliant, it seems that the film has found the right blend of horror and laughs.
And how refreshing is it to have a film set in a tower block that for once is not some moral story about gangs, drugs and stabbing, but rather uses all of this familiar imagery for something completely different. Only the presence of Nick Frost among the young and unknown cast is a jarring distraction, especially considering that he seems to be playing the same part over and over again. But there's hoping he only has a supporting part.
Still, I cannot wait for this!
at 21:57