The Rendez Vous with French Cinema is back again this year, already in its 16th edition, and taking its selection of French films to New York, London and Edinburgh. This is an initiative by Unifrance, a French organisation dedicated to showcasing and celebrating the best of contemporary French cinema around the world.
What I really like about those Rendez Vous is that they deliberately focus on a small selection of hand picked films rather than having a more generic French Film festival, and more importantly, send over directors and actors to take parts in informal q&a and meet their audience.

Thanks to them, I hold a cherished memory of last year screening of Les herbes folles (Wild grass) by Alain Resnais, who could not make it but sent out his companion and muse Sabine Azema. The film, surreal and baffling, might not have been to everybody's taste but she charmed the pants off the audience! Despite pushing well into her 60's, she pulled the black leather skirt outfit with class and elegance, and delighted us all with her wit and anecdotes. She took a genuine pleasure in conversing with the audience, staying well past her allocated time to mingle with her fans.
The London and Edinburgh selection this year is throwing a welcome mix of more established talents and newcomers. Not to be missed is Potiche (which can be translated by Trophy wife), by uneven but always interesting director Francois Ozon (8 women, Swimming pool), a colourful and witty comedy, with French acting royalty (Catherine Deneuve, Gerard Depardieu) and an enormous hit in France last year. The trailer is fantastic.

More questionable is the inclusion of The extraordinary adventures of Adele Blanc Sec by Luc Besson, which probably owes more to his popularity in English speaking countries than the quality of this film. (In France, Luc Besson is considered like the French Danny Boyle, all in flashy imagery with little substance and personality).

The film is based on a very popular French serie of graphic novels set in Paris in the 20's, with its heroine Adele Blanc Sec who I can only describe as a mix between Coco Chanel and Indiana Jones, battling up mummies and monsters while keeping her charm and elegance. I found the film to be a huge letdown, capturing none of the wit and humour of the novels, despite faithfully recreating its universe visually. 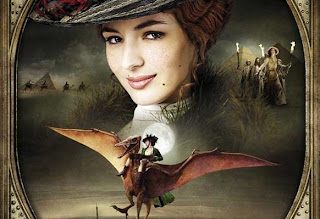 Also included, La princesse de Montpensier by Bertrand Tavernier, which was cruelly billed as La Princesse de Montpensum (The princess of my tedium) by some critics at the Cannes Film Festival last year. For amateurs of period dramas only.
Check out the Rendez Vous with French cinema website for more details. The films will be screened at the Curzon Soho and the NFT in London, from the 16th to the 20th of March.
at 21:40